And one sea space that proved to be a challenge in the recent past is the Sarstoon River area in southern Belize. On several occasions, Belizeans who were traversing the Sarstoon River were intercepted by members of the Guatemalan Armed Forces (GAF). A number of times these situations have resulted in a confrontation. However, last year was a calm year in the Sarstoon. Rear Admiral Elton Bennett told Love News that tensions decreased since the ICJ referendum. 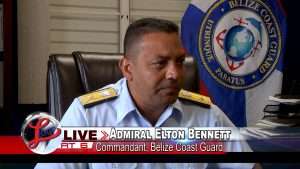 Admiral Elton Bennett, Commandant, Belize Coast Guard: We’ve seen a decrease since the referendum. Less tension from the Guatemalan military and Navy in that area. So I know the BDF still traverse the Sarstoon, we are there patrolling from Baranco down to the Sarstoon area and tensions have certainly decreased in that area.”

Reporter: And you will expect any Belizean that would want to traverse on our side of the Sarstoon they will encounter what Will Mahea and his team encountered several times in the past?

Reporter: What do you attribute that to?

Admiral Elton Bennett, Commandant, Belize Coast Guard: “I think it’s a referendum. I think Guatemala decided they would rely on the outcome of the ICJ.”