Twenty-two-year-old Belizean Christopher Williams was shot several times on Tuesday afternoon during a robbery in Illinois, Chicago, USA. His aunt, Michelle Walford, who is also in the US, told Love News that her daughter and son-in-law were also shot several times. Walford said that during the robbery, Williams was shot four times including to the head. He was rushed to the nearest hospital where he was placed on life support. However, things took a turn for the worse and this morning, Williams succumbed. Just before news time, we spoke to Walford who told us how it all happened: 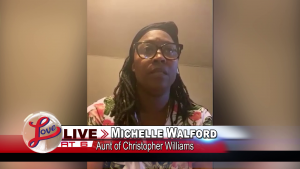 Michelle Walford, Aunt of Christopher Wlliams: “On Tuesday, I was at work. I got a phone call stating that my kids were robbed at gunpoint and shot. I quickly came down, went to the hospital. While there I met, my nephew was already connected and they were dealing with him so we had to wait a long time. The incident took place in Beach Park Illinois intersection with Louis Avenue and Wadsworth St. They went there to purchase gas. Someone just opened their door and said, “Give me all your money. Give me what you have.” and I guess they didn’t have anything so they were shot up. My nephew received four shots, one to the head. My daughter received two in her legs and my son-n-law received three in his back. At this time, we really, we have no clue. The police are trying to do all they can. Their investigation, there were multiple cameras around different buildings. At this time they’re not sharing any information with us pertaining to this case because it’s a case. Christopher succumbed to his injuries at 7:15 a.m. this morning. He was on life support and his body just couldn’t take it anymore. They tried to resuscitate him but it was not successful so he passed away. His mom and dad are going to be coming to make final arrangements to take his body back home to Belize for burial in Lord’s Bank. Christopher will be missed by everyone because he was a kid that everybody loved. He was a humble child and if you can see on Facebook, everybody posts the same thing. He was humble. Nobody even thought Christopher could talk because he was not the talking kind. He leaves behind his girlfriend. You know, me, I was his aunt who raised him from he was 13 years old. He attended highschool, graduated, and went off to college to do a trade. He was working and he was just living a normal life like any other teenager would do. He didn’t have any friends that we know of. His friends were his girlfriend, his brothers-in-law and my kids. Those were his friends. Those were the only people I know of that he would always be with so when this happened it was a shock to us. All I want is justice for all of them, especially for my nephew and I know that the police are doing everything and they will get to the bottom of it and I know they already know who did it and I want him to, whoever, if it’s one, if it’s wo, I want them to get justice for my nephew.”

According to Walford, it was a random robbery. Here in Belize, the victim’s mother, Eva Salinas, told Love News that her son was never a troublemaker. Salinas explained how the bad news was delivered: 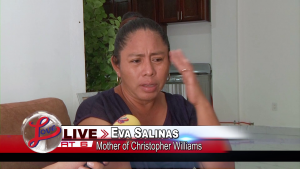 Eva Salinas, Mother of Christopher Willams: “I got a phone call but I didn’t hear well and all they told me was Christohpher is in an accident and I thought right away that it was a car accident, you know? And then he said, “No Eva.” He said he’s been shot and I said where? And he said to his shoulder and I just brushed it off because, you know, being a nurse, shoulder is just nothing major. So I said okay I will call back and then later in the evening I saw another message that said Ms. Eva please call me back as soon as you can. I called back and she said, “Eva, I‘m so sorry. Christopher got shot to the head as well.” And I said, “No can’t.” So I hung up the phone and I called his grandmother. She said, “Yes Eva. He got shot to the head and he’s not doing well.” And I just hung up the phone and tried to absorb the news and I was still in shock. I said okay well, maybe it’s not too bad and then I called again in the evening and they told me he had gotten multiple gunshots and it was both legs, his shoulder, and to his head and I just began calling my family and told them about the news and please just pray for me and him. Then Tuesday  morning I got more information, no sorry, it’s not Tuesday, it was Wednesday morning. His girlfriend called me because she was the one who was staying by his side from the time he got to the hospital until he passed away. You hear so many, I mean, you watch the news. You read it on social media and you hear relatives, I mean mothers, fathers, brothers, sisters, talking about their loved ones being shot and I always said “Hmpf, I wouldn’ want to be in their shoes.” Not knowing that mine was coming soon. I spoke to the neurosurgeon. We video chatted. She told me first, “Ma’am. I’m going to be honest with you. Christopher, clinically he’s brain dead. There’s no brain activity. We did a CT-scan on him this morning. I did some tests on him and he’s brain dead.” I still didn’t want to accept it. I spoke to the nephrologist and she said, “Ms. Salinas, his kidneys are shutting down. Would you let me do dialysis? But I’m letting you know that with the medications he’s on to stabilise his blood pressure, his body won’t allow it.” So I said okay. And the day went by. I tried not to think about it. I didn’t get any bad news again, I mean to say that he passed away and we were all praying for a miracle. And then this morning his grandmother called me and she said, “Eva his blood pressure went too low and they were trying to bring him back but he didn’t make it this time.” From the beginning, when his girlfriend had called me, his grandmother talked to me. She said “Eva when they went to the hospital, they had lost him and they brought him back. He’s on life support right now.” and I still had hope. I still had a lot of hope because he’s my first child and not one day I had to go to school, in primary school and highschool and say you know, Christopher is giving trouble.”

Williams had no children. His family has opened a GoFundMe account to raise funds to bring his body to Belize for burial in Lords Bank Village. Salinas shared the last time she spoke to her son.

Reporter: When you talked to him on SUnday or anytime before that, did he mention if he had beef with someone, if someone was after them? There was some kind of feud with somebody?

Eva Salinas, Mother of Christopher Willams: “Nothing, nothing, nothing. All we spoke about was how he was doing and what they were going to do for the evening and just, you know, simple things, just everyday stuff. He never mentioned to me, any, any, anything. I don’t know. Probably, he didn’t want to frighten me or whatever but I mean, one of his cousins would have told me because they’re always chatting and he has a step brother and I was kind of surprised when my brother told me. He said they speak every day. They were always chatting everyday. So and not one day none of them told me you know Chrstopher is in trouble because I mean. Let’s say Christopher was here right now, you wouldn’t even know he’s in the room because if you don’t tell him anything he’s not going to say anything and if you ask him any question, he will try to make the conversation simple, no explanation. No lengthy explanation, nothing like that. He was going to be 23 this 22nd August.”

Reporter: Okay. He left Belize at a very young age, I understand.

Eva Salinas, Mother of Christopher Willams: “He left Belize when he was 12 going to 13 because he finished primary school. He attended All Saints from Infant 1 to Standard 6 and from there, his grandmother said, “Eva, I’m asking you. Do you want me to take Christopher with me there?” and I thought about it a lot and I said, well let me try and he was back and forth coming to visit us.”