Over the past four months, the cost of fuel has been steadily increasing and it has sparked a wave of price increases across various sectors of the economy. As small businesses have been bracing for the impact for some time now, the inevitable is now being seen. For instance, Zeta Ice Factory implemented a price increase in November last year that was attributed to the rise in the cost of fuel and plastics used for packaging. Another company was the Crepe House in Corozal which announced back in December, that its production cost had risen therefore it would be upping its prices. Just this week, it was announced that the cost of poultry will experience a price increase, a move that is expected to cause a ripple effect. Also, this week, Chon Saan Palace announced that their delivery charge has gone up by fifty cents, also attributed to the high cost of fuel. It’s a situation that has consumers feeling the pinch and growing increasingly concerned over additional increases in fuel prices. With this growing concern, the media asked the Prime Minister if there were any increases expected in the next shipment and what, if anything, is being done to ease the fiscal pressures on consumers. 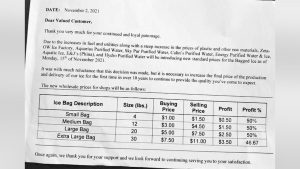 Hon. Dr. John Briceño, Prime Minister of Belize: “Probably in the next few shipments that will come, probably we may see the price going up but as you know, last week we had a consultation with our social partners which also includes even the Bus Association, the churches, the private sector, or NGO community, to listen to them and I must tell you, I was very pleased with the discussion that we had. Everybody understood that it is not something that the government is raising the taxes, it is that the price worldwide continues to go up. We do believe that it is stabilising but remember once it stabilises it takes the time for it to get to Belize so, probably in the next few shipments it may, might go up and then after that it starts to gradually go down. The idea that we had, one of the ideas that they are asking for from BTIA, they are saying, we want predictability. We want the Government to set the price. So we are looking, we got the recommendations and then next week we are going to present as to how we are going to stabilise. The idea is to stabilise the price, whereby, we’re thinking of maybe setting up a fuel stabilisation fund so that whenever the price goes up, we take from the stabilisation fund to be able to keep the price low and whenever then the price goes down, we continue to keep the price at the same level until we can pay it off. So it’s different ideas that we’re having that we believe can assist us going through this very difficult time. I mean in just our first year we managed to stabilise the economy. The economy is starting to grow but now we have to address these other issues that are affecting our citizens every single day.” 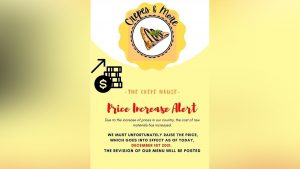