There were many fireworks today during the Sitting of the House of Representatives in Belmopan and House Speaker had to continuously remind parliamentarians of forty-two-B. That’s part of the Standing Order and says that a member present in the House during a debate shall maintain silence while another member is speaking, and shall not interrupt, except under the Standing Orders. And Speaker Valerie Woods had to stress this several times including when Prime Minister John Briceno was speaking. Here is that exchange. 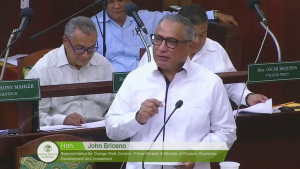 John Briceño, Prime Minister of Belize: “Be a man and apologise. That’s what you need to do. I am asking you for an apology because you created improper motive against the Minister of Health so.”

Valerie Woods, Speaker of the House: “Are you planning on a point of order?”

John Briceño, Prime Minister of Belize: “Yes Madam Speaker, I am asking on a point of order that we throw an improper motive against the Honourable member from Cayo North.” 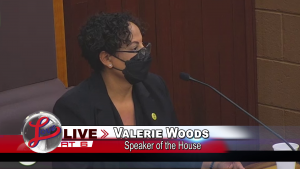 Valerie Woods, Speaker of the House: “May I ask for clarification on what reference in particular?”

John Briceño, Prime Minister of Belize: “Well he was alleging that as Minister of Health why when I was talking about how when his father admitted that the UDP was corrupt and said why is it that I mean. Why is it that I moved the Hon. Member from Cayo North? He was imputing improper motive. So he needs to give an apology to the member from Cayo Noth and withdraw his comment.”

Valerie Woods, Speaker of the House: “I take your point. It is an improper motive indeed if that was stated. Mr. Leader for the Opposition and just for clarification. Statements that have been aired publicly in the media has been entered in the House before. That’s not the issue. The issue I believe is the statement you made in reference to the reason why the former Minister of Health. I did hear. I hear your reference. I’m acknowledging the formal point of order. I’m asking you to withdraw it.”

Moses “Shyne” Barrow, Leader of the Opposition: “Madam Speaker, I did not say what the Prime Minister said. I asked him, “Why did he move the former Minister of Health?

Valerie Woods, Speaker of the House: “It’s not about instigating, it’s about imputing.”

Moses “Shyne” Barrow, Leader of the Opposition: “Why did he move? He could answer the question.”

Valerie Woods, Speaker of the House: “Are you going to withdraw? Member? I’m asking you to withdraw.”

Moses “Shyne” Barrow, Leader of the Opposition: “Withdraw what?” 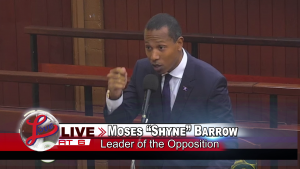 Moses “Shyne” Barrow, Leader of the Opposition: “I asked a question. I did not make a statement.”

Valerie Woods, Speaker of the House: “No. I can sus. I will suspend. I am asking you to withdraw. If you will not withdraw then I’ll quickly check the records. Then I’ll do that. Thank you. I will suspend shortly. Thank you.”

Speaker Woods says that the comments made by the Leader of the Opposition were not audible and as such, the point of order was not accepted. She went on to tell the parliamentarians that the House must be able to operate better than a group of kindergarten students.

Valerie Woods, Speaker of the House: “Now I will say this to you. If members, all members, disregard Standing Order 42B, it will require me to have to do these frequent checks. If that becomes simply too tedious for the Chair. I will then have to suspend and adjourn proceedings. I will ask members, kindly, to respect 42B. Now I am reminded, and I will say this, and don’t take it in jest because I don’t mean it in jest, of the conversation I have or had with the former Speaker, the Hon. Silvia Flores, and I take her counsel as I am reminded of her wisdom and her words. As she was an educator, this House must be able to operate better than a group of kindergarten students. I am being kind. She was a little bit more specific in her counsel to me.”