Embattled Collet Area Representative Patrick Faber left the country on Wednesday. He has four more days before his resignation from the posts of Leader of the United Democratic Party and Leader of the United Democratic Party becomes effective. As of last night, Faber had yet to tender his resignation letters to the UDP Secretariat. The latest development in the UDP leadership crisis is that Hugo Patt, the First Deputy Leader of the UDP has penned and signed a letter in support of Moses “Shyne” Barrow to replace Faber as Leader of the Opposition. Love News Patt why? And why not Tracy Taegar Panton who along with Barrow has expressed interest in replacing Faber. Patt explains it was a decision made by the leadership core of the party to allow the transition process to take place.

Hugo Patt, 1ST Deputy Leader, UDP: “This is part of the transition process which the United Democratic Party is going through and so all of this are just changes that will be in the interim in the meantime until we have a new leader elected.”

Reporter: Why did you decide to support Barrow for opposition leader given that he has also been accused of domestic abuse ?

Reporter: Okay, so you don’t expect that by your letter that Barrow would be Opposition Leader permanently ?

Reporter: What we saw recently there was a different Opposition Leader and a different leader of the party so you’re saying that whoever becomes party leader would definitely for sure become the Leader of Opposition ?

Hugo Patt, 1ST Deputy Leader, UDP: “That is exactly the case. That was what was agreed upon and that is something – as soon as I said if elections are held tomorrow the following business day then that person becomes the new party leader and the Leader of the Opposition.”

Reporter: But the position of Leader of Opposition gets decided on by the opposition members in the house, what assurances have Barrow given that he won’t hold on to your support and become Opposition Leader for a long period if he loses the convention ?

Hugo Patt, 1ST Deputy Leader, UDP: “This is a decision that we took upon some of the consultations and from there onward. As I said in my position I will allow all candidates who apply to communicate with my delegates and we will try to be as open and transparent to everybody.”

Reporter: Are yu able to say whether or not Mr.Faber has officially tendered his letters of resignation ?

Hugo Patt, 1ST Deputy Leader, UDP: “Probably the chairman of the party would be in a better position. In terms of the secretariat an so forth the best person would be him to answer that question Hipolito.”

Faber was forced to resign after another allegation of domestic abuse was made against him. He announced his resignation on Monday via a pre-recorded video statement. Toledo West Area Representative Oscar Requena says it’s an unfortunate situation. 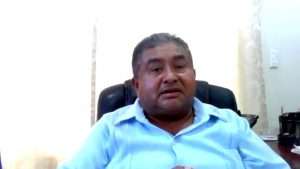 Oscar Requena, Minister of Rural Transformation, Community Development, Labour and Local Government: “It’s unfortunate that the Honorable Faber finds himself in this situation. What is unfortunate about it is that you know this seemingly seems to be a pattern. You know, it’s not the first time and you know some people are very quick to be judgmental others are not because I believe that as humans at some point we do falter but the important thing is that if you make a mistake we should be able to learn from it and we should be able to amend our behavior and our ways of doing things. At this point I believe he has gone very far and you know really I want to say that as a leader I must say that I am very respectful of women. I believe that we must at all times be respectful to our women and we cannot condone any type of violence against our women. Our women are our partners, they’re partners in development, they play a very important role as pillars of our society and as such we must give them that respect. The time has come that we need to move away from perpetrating any kind of violence against women.”