The Immigration Department has had to lay off a security guard and a second is on the chopping block after a sting operation on Friday uncovered a hustling ring. As we reported, the security guard got a hold of the numbers, which are assigned to customers at the Belmopan office as they queue up. However, instead of issuing the numbers to the first ones in line, those numbers are sold to the highest bidders, sometimes in the hundreds of dollars. We spoke to the CEO of the Ministry of Immigration, Doctor Gilroy Middleton, about the situation today. 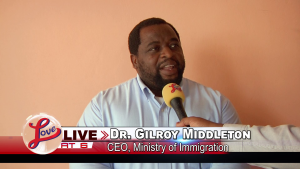 Dr. Gilroy Middleton, CEO, Ministry of Immigration: “In terms of agents in the ministry being involved in it, this year so far we have had to deal with a security guard that was found to have been selling the tickets. The only way we were able to deal with him was because the individual came forth and made a formal statement and that security guard was given due process. He was eventually relieved of his post and I recall you sent a message for me on Friday which I never replied to. That was because we were doing a sting and again it came down to another security guard. This time the security guard was fronting as if he could get an individual’s passport printed quicker. What he was doing is, would be going inside, acting as if he was assisting from the batch of passports coming, sorting through them and finding a specific person’s passport and providing it to the person at the window and we will have to go through due process with him. So from our experience investigating into it, thus far we’ve only, this year alone, found two security guards involved in this type of activity.”

For years now, people across the country have felt that the system to apply for a passport is tedious. It requires a trip to Vital Stats in some cases, which in itself is a tiring process. Then there’s the long wait to apply for a passport because as we’ve told you, the passport service itself is operating at a diminished capacity. All these things force people, who just can’t stand in line for hours, to use clandestine agents to facilitate the process for a huge profit. We asked Dr. Middleton how the system can rely less on these agents. He explained that some people just simply prefer to do it that way, even though applying is free. 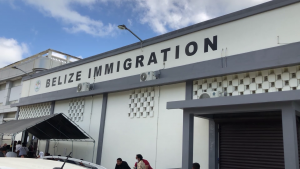 Dr. Gilroy Middleton, CEO, Ministry of Immigration: “Well in terms of these, ridding the system of these unnecessary middle men, I’m not sure we will be able to do that. For example, we had these individuals standing at the gate saying “I will fill out your passport form for $25.” A woman came in. I saw them go to her.  I went to the woman. I intervened. I told her we have the forms inside for free. I can get you two copies. I’m willing to sit with you and do it and she literally said “No. I will pay him to do it.” I said ma’am it’s filling out your name, your address, and your information. For some reason, the public prefers to have other people do it for them. What we have done is we’ve put all the information online, the services, the processes, the fees. In terms of informing the public, in terms of teaching them how to go through the processes, so I think that will be the first step. We’re currently on a, we’re starting a media campaign with the amnesty and then we’ll do on the new passport system and in the third quarter of this year, we’ll look at educating the public about Immigration. People think of it as being something mystifying, being something they can’t do by themselves. I recall speaking with these individuals that would line up at our gate. Now we have, we’re getting assistance from the Police Department that literally clears them from the gate, threatening them with loitering and a week later I receive a letter where I’m copied in the letter addressed to the Mayor of Belmopan informing her that these guys across the street have a valid licence to some degree from the Belmopan City Council and we’re hindering their business. So, it’s a very delicate situation. They have a licence to operate a copy shop. They have a licence to operate taking pictures but they have no licence to be going in and literally telling these customers all sorts of stuff.”

With Friday’s sting operation, there were changes this morning at the Immigration Department. The security guards are reporting to work even earlier, the Police Department has intervened in the process, and the Ministry is considering moving up its capability to have people apply online for their appointments.

Dr. Gilroy Middleton, CEO, Ministry of Immigration: “What was being done is that the security guards would report to office at 6 a.m. and allow individuals to come in and sit. So, as of this morning, we have the security guards reporting in at 4 a.m. and allowing individuals to get off their feet and sit and also the Police Department is assisting us. Recently, they’ve actually been removing the cones but now they will go further and have a police officer side by side with our guard who would be there and if any extortion and if any exchange of money for a spot happens, they would take action. So, that would be immediate. We had planned to do an appointment system for the opening of the new passport system in October. However, we may need to bring that plan up and work on appointment systems so individuals would know I have an appointment at 8:30, there’s no need to come at 4 a.m. and the one thing why we didn’t want to go to the appointment system before the new system is that it would reduce the number of customers that we have been seeing and since the opening of the borders, we have been seeing a 100% increase in the numbers of individuals requesting passports. The annual average is some 20,000 passports for the year. As of where we are now, we’ve already issued 22,000 passports, so more than double.”

However, come October, a new passport system will be implemented to end the backlog, which Dr. Middleton says came as the borders reopened and more people wanting to travel. That new system is absolutely necessary because the current one has served its time.

Dr. Gilroy Middleton, CEO, Ministry of Immigration: “A major point is that we’re operating with a passport system at 40% operationality. The only three locations that you can apply for a passport are at Corozal, Belize City, and Belmopan. Once the new system becomes operational in October, you’ll be able to get your passport in every district and also at San Pedro. Therefore, they would have less people and also this 3 a.m. lining up, to my knowledge, has simply started since the opening of the borders and the loosening up of the restrictions.”

Dale McDougall, Love FM News: Okay, so people can look forward, by and large, to not having to get up at 4 to get passports and they would be able to apply online. Correct?

Dr. Gilroy Middleton, CEO, Ministry of Immigration: “Yes. They can look forward to not having to get up and they can look forward in terms of the online application. Currently, we’re doing the amnesty application online and we’ve gotten some forgoing 5000 applicants. So, the public, they’re learning how to use the online and we will draw from that experience in terms of the new passport system. As noted, we may have to resort to the online application for passports before we arrive at the new system but they can look forward to it. One issue that we have been informed of in terms of people, speaking with Social Security, is that you go online now and you don’t have an appointment until two months later. So, there are pros and cons with that appointment system.”