Workers in the Immigration Department are upset with the CEO, Dr Gilroy Middleton. Workers are so frustrated with the CEO that they are organizing to show their discontent. This is what President of the Public Service Union (PSU) Dean Flowers told the media this morning. Flowers says that the PSU has written the CEO regarding the employment of a public officer. However, CEO Middleton reportedly has been unresponsive and the PSU has had enough. 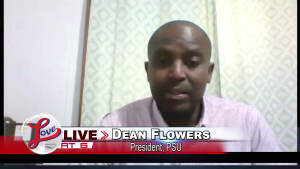 Dean Flowers, President, Public Service Union (P.S.U.): “Four months have passed and the CEO has not responded to us. We have reached out to the Ministry of Public Service who has themselves written to the CEO to say we are awaiting the report of the interview so the selected officer can be appointed. To date, the CEO in the Ministry of Immigration continues to fail in filling that vacancy from and the excuse that I’m getting, the rumbling from within the department is that the individual who was successful is not of a blue pedigree and these types of nonsense must stop man. This administration said they’re here to reform. They even included the word reform in the Ministry of Public Service. So how is it then that we’re seeing more and more of the same? The immigration officers are frustrated. They are frustrated. They’ve reached out to this union and this union is now mobilizing to organise them for us to take decisive action against what is political maneuvering and political contractual hiring within the Immigration Department. So if it is that the service within the Immigration Department gets any worse in the coming weeks or months, it is not the fault of the Immigration Officer but it is the fault of this administration by way of the Minister and the CEO in the Ministry of Immigration.”

Dean Flowers, President, Public Service Union (P.S.U.): “I am baffled to learn now that once again they’re contemplating renewing contracts for these retired officers when we have highly qualified and experienced Immigration Officers, Port Commanders out there that are waiting for an opportunity to move towards Director. These people have a legitimate expectation in accordance with the Public Service Regulation. Why are we issuing contracts to a Director of Nationality and Passport? Why do we continue to issue contracts to a Director of Refugees? 65 years old. These individuals have served. They are stifling the growth and development of competent public officers in the Immigration Department. Contrary, contrary to the Public Service Regulations and so I want to call out the CEO in the Immigration Department. You are a young CEO sir. You say you have the best interest of the Public Service at heart. How can you then justify keeping, contracting public officers who were part and parcel of the mess that the Immigration Department is in? Because they’ve been there for donkey years man and nothing that they’ve done has transformed that system. To date, the Immigration Department continues to be a nightmare for Belizeans.  How can you then justify bringing back these people?”