While Prime Minister Briceno has described the Royal Visit as an exciting time, the villagers of Indian Creek are not expressing any level of excitement. Villagers gathered this morning in protest of the Royal Visit to Indian Creek. Some placards read, “This is not Crown Land”; while others wrote, “Prince William Leave the Land” and “Not Your Land, Not Your Decision”. Indian Creek is one of several visits on the Royals’ agenda for Sunday where they are to get a tour of the cacao farm. Love News understands that the villagers are rejecting the visit due to the Duke’s association with the organization, Flora and Fauna International (FFI). The FFI reportedly owns some twenty thousand acres of land adjacent to Indian Creek Village, which is currently part of a land dispute under a communal land rights claim. Senior Correspondent, Paul Mahung spoke with the Alcalde of Indian Creek, Mateo Chub, who explained that he was not informed of the visit until Police had gone to the village to inspect the football field where the helicopter, transporting the Duke and Duchess, is slated to land. According to Chub, the villagers had a meeting yesterday where the matter was discussed.

Mateo Chub, Alcalde, Indian Creek, Toledo: “Nobody came around or nobody gave us a letter saying that this big man is coming. That’s why when people, my villagers, come around and they ask me if I know, I tell them I don’t know because when I don’t know, I don’t know. I waited and waited and waited until the last minute yesterday. Nobody came and told me anything. I don’t know. The people they are asking now. Let us know what is happening. Maybe you the leaders know so tell us what’s happening. So then we held an emergency meeting yesterday and about 260 people came in and we told them that we don’t know anything about it. The problem is that when the people know this big man here who is landing right here on Sunday, they are the ones who are giving money and we know because we did the research and we found it, that he is the one who gave the money *inaudible* and he is the one who wants to buy or he has already bought the land from Indian Creek that’s why we are doing this right now. If the big man will land in Indian Creek, he will just go with one family and go back and what about the villagers? So this morning, people are getting frustrated and me, myself as Alcalde, I see myself like I am nothing to them. So now, we the Maya people, our eyes are open. Our ears are open. We know our rights so we are not fighting with hands. We are only protesting you know.”

Reporter: And what about Sunday morning? Any plans or anything?

Mateo Chub, Alcalde, Indian Creek, Toledo: “There’s no, you know why it’s no plan? Because they came to us and told us, you have to be there if you want to look when the chopper stops or pitch, you have to be there 200 yards away. Nobody is allowed in there, nothing. So that’s why we are like this, not because of a lot of security but we respect them.”
Chairman of Indian Creek Village, Sebastian Shol also spoke on the protest of the villagers. According to Shol it all boiled down to communication and respect.

Sebastian Shol, Chairman, Indian Creek, Toledo: “We welcome any visitors, any official but they have to, you know as the organiser in the Ministry of Foreign Affairs talked to me yesterday, she called me yesterday and she told me it is her apology that she didn’t approach the leader of the community. So I told her that is not the way. You’ve got to approach the leader of the community so that the community can be aware of what is happening in the community. But they didn’t. They didn’t approach anybody. Just yesterday she was telling me, she was asking me to apologise because of that. She didn’t know this and that. So that’s why the people are happy. We welcome, we welcome the person who is coming here to the community but we have to go through the right procedure. So that’s all we wanted.” 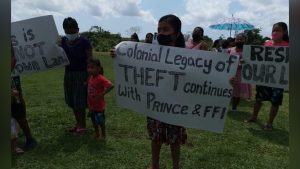