Earlier in the week, we reported that the BDF’s Forward Operating Base at the Sarstoon needs urgent repairs. Rising sea levels and erosion have threatened the structural integrity of the BDF base. As such, the order was given for soldiers to operate from the Coast Guard base in Barranco Village while still keeping a presence at the Sarstoon. This recent development will require that BDF soldiers travel from Barranco to the Sarstoon more but according to the BDF’s Acting Chief of Staff, Lieutenant Colonel Jermaine Burns, there are benefits to this. 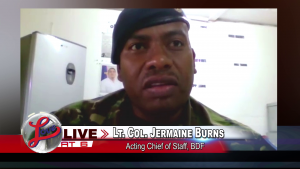 Lt. Col. Jermaine Burns, Acting Chief of Staff, B.D.F.: “F.O.B. used to go to Barranco for the week for about three times to get water and other logistics in from Barranco because that’s the way we supply them. The runs now will, instead of three, be about seven runs for the week, if not six. You would see where there will be a slight increase in fuel consumption but the idea will be to, instead of using a gas boat we use a smaller Diesel boat and smaller engine or something so that the cost is not or the increase of the operational cost is not as much as you would think that oh they have to back and forth everyday now so it’s a lot of money in respect to fuel. What it will do though, for us back and forthing, is give the soldiers an opportunity to always have a presence along the coast because there’s a significant amount of illegal fishing that had always been happening between Barranco and the F.O.B. that we’ve been concerned about. So it will deter any such activities. It will also give the soldiers an opportunity to check along that coastline for any vessels or anything else illegal that may be happening in that area so it will increase our presence to be moving more than before now so than before. So I wouldn’t say that it would negatively impact us at all in respect to costs and we’ll definitely get more benefit out of moving to and patrolling from the F.O.B. to the Barranco area and back on a daily basis.”

Burns says that the BDF has not been restricted when it comes to the usage of fuel.

Lt. Col. Jermaine Burns, Acting Chief of Staff, B.D.F.: “Fuel restrictions, I think, has been felt across all ministries in the Government Departments. You and me know that there’s this significant hike in fuel prices and so on but we have in no way, shape, or form, shied away from allotting the said amount of fuel that we were allotting before to our soldiers and I’ve only just spoken to the G4 officer, who is our finance officer in respect to the request for more fuel in the south for these movements because it has to happen. So it’s not a matter of whether we have the fuel or not, we’re definitely going to make sure that those patrols are happening on a daily basis.”