The issues at St. Francis Xavier Credit Union seem far from resolved. As we’ve reported, there is an impasse between the board of directors of the institution and a group of individuals, who say they speak on behalf of the members. When we last reported on the matter, board chairman Roy Smith explained why Rafael Dominguez, who was general manager for ten years, was not allowed to continue. However, the members, led by Mayet Castillo insist the board is making wrong-headed decisions, which need to be resolved now. Dale McDougall has their side of the story tonight. 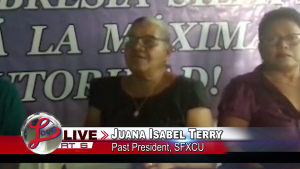 Dale McDougal, Love FM, News: And that darkness, the members say, is the crux of the impasse they have with the rest of the Board of Directors at the St. Francis Xavier Credit Union. The members have maintained that they are unhappy with the decisions the Board, led by Roy Smith, is making.

Juana Isabel Terry, Past President, SFXCU: “Thursday morning we have to have an annual general meeting for further clarity because what caught my attention when they had a demonstration last week was poster that was held by somebody it said “El presidente nos ha defraudado” , which means “The president has disappointed us.” This is very true. He has greatly disrespected the owners of the Credit Union who are members.”

Dale McDougal, Love FM, News: As we reported, one of the issues they are having is the decision not to renew the contract of the Credit Union’s General Manager Raphael Dominguez. The Board insists that his continuing at the post will not benefit the credit union. However, the members want him back because they feel he did a good job in the decade he’s been there. 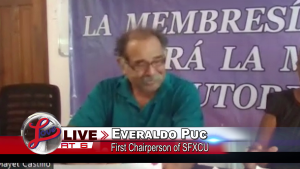 Everaldo Puc, First Chairperson, SFXCU: “What makes matters worse is that only an AGM can decide whether the manager stays or not. So that also, yeah. It was illegal, completely illegal and what you need to mention here also because it’s coming out, the different kinds of social media, at least in our district, is that he hasn’t been managing well. Well for your information, during ten years of management assets have grown from 53 million to 107 million. Membership has grown from 23,000 to 32,000 and growing. So there is no augment about efficiency and that is why the majority of members wants him back and the Board doesn’t have the power to say that he is no longer our General Manager.”

Dale McDougal, Love FM, News: The members, who want an AGM on May 29, say that the important meeting should be done quickly. They also want several other issues resolved including the actions which jeopardise the work of the supervisory committee. Mayet Castillo explained. 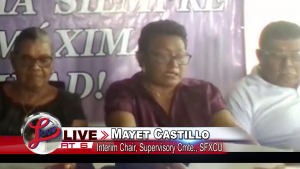 Mayet Castillo, Interim Chair, Supervisory Committee: “The committee shall consist of not less than three members and it may fill vacancies in its own membership until the next Annual General Meeting when successors shall be chosen. This is simply telling us, within the supervisory committee, members can interview and appoint interim members until the GM or the AGM, Annual General meeting that we call it, elects them. The supervisory committee, I must say, that is an autonomous committee which no other committee should interfere in their discussions or their decisions that they make.”

Dale McDougal, Love FM, News: Castillo also insists that there are about 2000 members who have signed a special petition reflecting the voice of the members who also want this resolved. Issues which include what they call “gross irregularities.” They also want Roy Smith and the current Board gone because they contend Smith and the rest of the Board have simply overstayed their time. For now, the only thing that’s clear is that both sides are unyielding in their positions. Dale McDougal for Love News.