In the north, fire officials are investigating the cause of the fire that destroyed Jahmundo Restaurant and Sports Bar. The well-known establishment in the Corozal District caught fire at around five o’clock yesterday evening. Today, Reporter Vejea Alvarez and cameraman Brian Castillo headed up north to find out what happened. Here is that report.

Vejea Alvarez, Love FM News: Tonight eight persons from the Corozal district are without a job after Jahmundo Restaurant and Sports Bar was destroyed by fire. The blaze broke out just after 5:00 yesterday evening. Owner of Jahmundo, Ephraim Phillips, says he was alerted by an employee and rushed out to the scene.

Ephraim Phillips, Owner of Jahmundo: “Around 5:20, 5:15, I got a call that Jahmundo was on fire. I was at the mechanic and I rushed over. By the time I got here the place was already engulfed in flames. I couldn’t do much. The Fire Department was already here and some of my workers that had gone home, had just gone home, they were back here trying to save what they could have saved for the parts of the compound.

Vejea Alvarez, Love FM News: Fire personnel responded to the establishment located on Consejo Road in the Finca Solana area of Corozal Town and were able to save portions of the business. An investigation has been launched to ascertain the cause of the blaze. According to Phillips, at this time, the fire is believed to have been a result of an electrical fault. 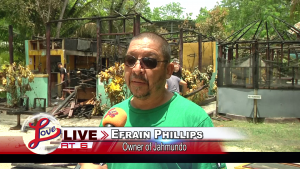 Ephrain Phillips, Owner of Jahmundo: “We were getting ready for a function that the U.S. Embassy would have been doing today. So, we had just left and had everything ready for today and the caretaker that was here, he went out shortly and by the time he came back the place was already engulfed. So, from today, the Fire Department came to assess some damages and they think that it was the fire started from a faulty fan or something on the wall and it shows the evidence there so we don’t think it’s any sabotage or so. The main damage occurred in the main bar, in the main area. So, I lost everything there. It was a concrete structure with a palapa top. So, the palapa, the thatch burned very easily and then it spread to four more of the palapas I had and they were thatch too and so those were all destroyed too in the fire.

Vejea Alvarez, Love FM News: An official cost of the damages is yet to be determined but Philips estimates the loss to be around $70,000. The retired customs officer says he is heartbroken because just this week he was to replace the thatch roofing of the establishment for it to be insured.

Ephrain Phillips, Owner of Jahmundo: “Unfortunately, I tried to insure it but because of the material, I was told that I had to change it to metal and metal purlin so that was my plan. I had already purchased the material but I didn’t get a chance to change it because of the upcoming events that were going to happen this weekend. So, everything was lost and no insurance. The place wasn’t insured.”

Vejea Alvarez, Love FM News: While the loss of his business has caused Phillips much pain, he says he’s grateful for the outpouring of support from the community members who have pledged to assist him in the rebuilding of Jahmundo.

Ephrain Phillips, Owner of Jahmundo: “I have this project going on for four years or more but the restaurant is open a little over a year now and I have some nice workers and we’ve got to try to rebuild, mien. The workers say they’re 100% behind me. Thank God the support from my neighbours and my friends in Corozal, from all over, has been overwhelming and giving me courage to don’t give up, just try to rebuild over and get it going again. So that’s my plan is to try to start over and get everybody back on track and see how I can get it done again

Vejea Alvarez, Love FM News: Phillips added that anyone willing to assist him in the rebuilding of Jahmundo is welcome to do so. If you’re willing and able, he can be contacted via the Jahmundo Facebook page. Reporting for Love News, I am Vejea Alavrez.