Love News has confirmed that the person who allegedly ordered a hit on Police Commissioner Chester Williams and a magistrate is Canadian national Jasmin Hartin. Hartin is no stranger to the law and certainly not to the public. Tonight she stands accused of trying to contract a killer, but her attorney says it’s all nonsense. Richard Dickie Bradley says that the police commissioner has nothing to worry about because the allegations are simply not true. Bradley says the allegations were made up by a person who suffers mental challenges. Here is how he explained it to Love News via phone: 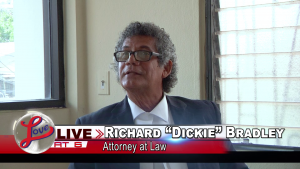 Richard “Dickie” Badley, Attorney: “Well Hipolito, we are living in strange times. How will that ever benefit Ms. Hartin? Ms. Hartin has gone through the roughest part of her situation with law enforcement in terms of the matter for which she is in front of the court. I discussed with her today, earlier, and advised her to stay strong and that things like this will happen. Apparently somebody who is not in full possession of their marbles are making some very wild allegations. Hartin went to the police to make a report when she learned of the nature of what was being spread in the small village where she is staying. There can’t be any truth to it. It doesn’t even make sense. Who would want to take the life of a magistrate? How can that be of any help to anybody? There’s going to be a replacement magistrate. How does that help anybody? As for killing Chester, Chester has been in the belly of the whale and in the mouth of the lion. He is the one who is confronting the gangs in this country so another threat to his life is just like saying, well join the cue, add on to it. That one is even more preposterous. I hope the media doesn’t give too much credence to this because it is just sheer nonsense that is going around.”

Richard “Dickie” Badley, Attorney: “When I spoke to her this morning, she did not indicate to me that there was a raid. Why would there be any raid? She’s not a threat to anybody. She’s not, I mean that. *Inaudible* You know I didn’t even bother to ask her that. There’s no need for that. She’s living on a small island. I know one of the police officers out there who is, well they said “noh call” somebody had said “noh call no name” but she will go to, she will go to that house and ask what’s happening and if she wants a statement, she’ll invite Jasmin down to the police station to take a statement but nobody can threaten Chester. Nobody. He’s the biggest man in town. He has absolutely no reason, no grounds to worry in relation to this matter because he’s Billy the Kid and Sheriff Pat Garreth all in one. There is no need for him to even ask his officers to be on double alert. This whole thing is just, lone nonsense. That’s what it is.”