Accused cop killer, Jasmine Hartin is expected to stand trial by the end of June. Hartin was due in the Magistrate Court on Monday morning in connection to the shooting of Senior Superintendent of Police, Henry Jemmott; however, she was noticeably absent. Hartin was accused of fatally shooting Jemmott over a year ago. Her attorney, Richard “Dickie” Bradley explained that the delay is due to a backlog of cases. 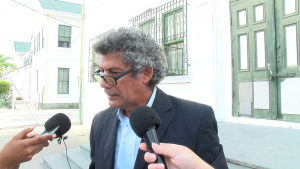 Richard Dickie Bradley, Attorney: “I had explained already publicly that because that is an indictable matter, a serious matter that can only be tried in the Supreme Court of Belize. To reach the Supreme Court of Belize for a trial the procedure is all matters, anybody and anybody who is charged must go in front of a magistrate. Indictable matters go through a procedure where once the investigators are completely satisfied they have covered all their bases the statements and all the evidence to be used including exhibits are then made available in what is called a disclosure. In Supreme Court we speak to the file as a deposition. Once that takes place and the magistrate is satisfied that there is some evidence and it’s indictable and she has no further authority she sends it to the Supreme Court. Jasmine Hartin’s matter the allegation that she committed an offense which is a manslaughter by negligence has been sent by the magistrate court in San Pedro to the Supreme Court. I know because the DPP was kind enough to inform me that Jasmine Hartin is on the list of persons who are going to be indicted more than likely before the month of June is out.”

Hartin’s former partner, Andrew Ashcroft, left Belize on Monday and took their children with him. In a press release, Ashcroft explained that he and his twin children will now be residing in Turks and Caicos where he developed a resort, similar to the one he owns in Ambergris Caye. Bradley says that Hartin’s attorney in the family court matter has issued an appeal on the custody of the children.

Richard Dickie Bradley, Attorney: “The father of Jasmine’s two children announced that he is leaving the country that is the matter the media should be finding about because it is our understanding, I’m not the lawyer for the family court matter with custody, is the understanding that in fact the attorney for Jasmine in relation to the custody issue has filed an appeal in the Supreme Court why is he dashing out of the country to run go for ?”