Andrew Ashcroft, the former partner of accused cop killer, Jasmine Hartin, is leaving Belize and taking their children with him. In a rare press statement today. Ashcroft writes that he and his twin children will now live in Turks and Caicos where he claims to have developed a similar hotel. He says that he will visit Belize from time to time. As for Hartin, he says (quote) “I hold no ill will or malice towards Jasmine and wish her well with the court proceedings in which she is facing charges of manslaughter, cocaine possession and common assault.” (end of quote) And that trial was expected to commence today. That, however, did not happen and her attorney Richard “Dickie” Bradley gave Love News a brief update. 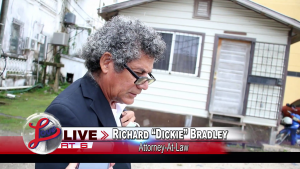 Richard  “Dickie” Bradley, Attorney: “She’ll be arraigned as soon as the court system allows for arraignment. Ms.Hartin will go through the procedure that is required by the court and she will be arraigned in the Supreme Court in a few days.”

In the release, Ashcroft says that he gifted Jasmine 10% of the issued share capital of the holding company of The Belize Alaia Hotel. He says that he intends to obtain an independent valuation for these shares and to provide her with their fair value.” (End quote)