The Ministry of Health and Wellness this morning issued a caution on the recall for Jif Peanut Butter Products. A release from the Ministry says that the J.M. Smucker Company voluntarily recalled select Jif peanut butter products due to potential Salmonella contamination. The Ministry has commenced a thorough investigation at major supermarkets countrywide as a precautionary measure. Where these products are identified, they will be seized, condemned, and destroyed. The Ministry says that healthy persons infected with Salmonella often experience fever, diarrhea (which may be bloody), nausea, vomiting and abdominal pain. Epidemiologist Dr Russell Manzanero told Love News that since February the Ministry began registering an increase in gastroenteritis cases. 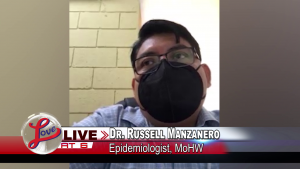 Dr. Russel Manzanero, Epidemiologist, MoHW: “From the moment of manufacturing and the handling of the, I guess the food item in the bottles and that’s where it can happen.”

Reporter: Well more so, which one of the ingredients would more than likely be the cause of the contamination?

Dr. Russel Manzanero, Epidemiologist, MoHW: “I can’t say. If it were up to that they would need to do some more testing but I would believe that it would be from the nuts so those are areas that would need more testing. I mean we’ve been seeing an increase of gastrointestinal cases since February. So we’re seeing that these, during this time is when we usually see an increase of GE. We call them GE, Gastrointestinal, Gastroenteritis, sorry. So when these kinds of things happen, we’re seeing it in individuals who are under five and over five so it’s in the general population. Again, we can believe that it is part of the relaxation of the restrictions. I mean, there is an increased movement. Individuals are moving around back to work, back to school. There’s more consumption of food from vendors so all of this is a possibility. We are heightening that response in surveillance when we’re trying to see what those GE cases are in its entirety. So we’re getting an understanding that it’s not only salmonella but we’re seeing other pathogens that might be out there, again, so we make a call to the public that this something that can be avoided, can be prevented in the correct handling and the adequate cooking of the food, those are key elements to actually curb that situation. And similarly with salmonella, that is something that is, it is a food borne illness and it can be avoided as well. So these are instances that you can take to curb that situation.”