The Christmas break is over and done, and the unions are pulling no punches when it comes to the salaries of the teachers and public officers. To date the public officers and teachers are still at a ten percent cut in salaries on the backdrop that full salaries would be reinstated once the economy improves. The unions are holding the government to task and are now looking to see how fiscally responsible the Briceno administration has been. Earlier today, the Joint Unions Negotiating Team (JUNT) is requesting as many as eleven reports from the Government as they relate to the country’s revenue and expenditure. A 2-page press release from the JUNT explained that the request for the reports is for them to review and prepare for its upcoming meeting with the government on January 12. These reports include the government’s fiscal strategy statement; its collections of revenues and its expenses spanning over the past six months; its payments of interests and principals on the country’s debt; the issuance of public grants; the repayment profile of the Blue Bond; the pay-off of the Superbond; a detailed report on the supplementary appropriations; plans for new fiscal measures for the remainder of this fiscal year. The unions are also asking for a full list of the statutory bodies that the government subsidizes and whether they are holding these bodies accountable via financial statements. The release goes on to say that the government should have no problem furnishing them with these documents as a meeting was recently held with the Social Partnership Advisory Committee (SPAC) where the state of government finances was discussed. In addition to the reports, the unions say they are looking forward to discussing the benefits to public officers and teachers including special facilities at the National Bank and the Development Finance Corporation (DFC). 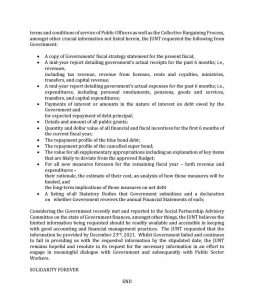