The sugar cane crop season officially comes to an end on Friday, July 29th.  After the last cane truck makes its delivery, the mill will commence its maintenance work process for the new crop season. And like this culminating season, the new season will experience some challenges. According to BSI’s Cane Farmers Relations Manager, Olivia Carballo Avilez, one of the expected challenges will be the frog hopper. 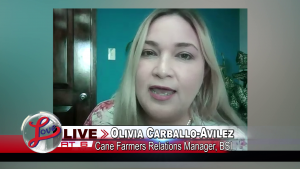 Olivia Carballo-Avilez, Cane Farmers Relations Manager, BSI: “Frog hopper is not a frog and it’s not a grasshopper. It’s a small little bug that almost looks like a ladybug and what it does is it inserts its mouthpiece into the leaves of the cane and injects some toxins into it and it really extracts the juice out of the cane, of course, the cane is sweet. And if they have a high egg population, we’ve done some monitoring. We are able to determine, more or less, if they are going to have a high froghopper population. So, what we do is alert farmers. So three months before you know you have a high egg population in your fields, make sure you are ready to address these pests. There are several methods to address it including biological and cultural methods, which we would recommend first using a fungus really to attack that particular pest and keep its population in check. It’s difficult to eradicate these. They are part of the natural environment. They are part of the ecosystem and it’s a matter of controlling their population. So, that is what we try to advise the farmers in advance. If there are some fields that require chemical interventions then the types of chemical interventions are recommended because the farmers are Fair Trade certified and they need to have not just the appropriate chemical but also the monitoring.”

Carballo- Avilez says that the mill will be working with farmers to ensure minimal impact.

Olivia Carballo-Avilez, Cane Farmers Relations Manager, BSI: “It’s some little bugs that start, with the adequate conditions of moisture and heat, they start to expand. So one froghopper egg and one adult or a set of adults can generate millions of eggs and so once they start to proliferate, they go through a process, the larval stage where they, we call them the nymph and they become an adult. So it’s like a spittle. They are covered by something that looks like spit at the stool of the cane and they become adults. It’s like having a swarm of bees or mosquitoes but a swarm, a big swarm and you can actually enter a field and see a swarm of adults if they are not controlled.”

Reporter: Okay what was the last time we had an issue with froghoppers?

Olivia Carballo-Avilez, Cane Farmers Relations Manager, BSI: “We have it every year. It’s part of the ecosystem as I said. Some years more than others because the conditions are better.  And back in 2009, 2010, we haven’t had really big issues. We haven’t had those kinds of elevated populations since then because there was a complete program to help control the population. So, it’s a matter of controlling. SIRDI, the research institute is heavily involved in this kind of work and they produce, we have a laboratory that produces the biological control to keep it in check.”