The killing of a teenager in San Ignacio Town, Cayo, has left a community outraged and in mourning. On Tuesday evening, 19-year-old Chris Rodriguez and his cousin were playing football at the Norman Broaster Stadium when the caretaker, 20-year-old Fausto Teck, asked them if they had tickets to be inside the stadium. The duo did not so they left but when they were leaving, Rodriguez decided to ask Teck why tickets were necessary. That conversation led to a physical fight that led to Rodriguez being stabbed and succumbing to the injuries this morning. It’s truly an unfortunate situation that has caught the attention of the nation. With the help of Cayo Correspondent, Eliu Yacab, reporter Vejea Alvarez has the story.

Vejea Alvarez, Love FM News: This shocking video captures 19-year-old Chris Rodriguez running for his life after being stabbed to his neck and body by 20 year old Fausto Tek. On Tuesday evening, Rodriguez and his younger cousin were playing football at the Norman Broaster Stadium in San Ignacio Town, Cayo. When Tek, the field’s caretaker, approached them. Tek asked the cousins if they had a ticket to show that they paid to enter the field to which they replied no and were asked to leave. But as the teams were exiting, they met Tek standing near the steps. Rodriguez reportedly asked Tek why they needed a ticket to use the field which led to a fight. During that fight, Rodiguez was fatally stabbed. Shortly after, he was rushed to the Western Regional Hospital where he shared his final moments this morning with his father, Manuel.

Manuel Rodriguez, Father of Deceased: “Just minutes before he passed away, he was happy you know. We were talking about soccer and horse racing and I was telling him that as soon as he recovered I would attend his game. Now you know? Because when things happen like that, it’s like you have a second opportunity to share along with your son, show them the love that you’re interested in and you will support them in their sport.”

Vejea Alvarez, Love FM News: Unfortunately, Rodriguez will never get the opportunity to watch his son play another match and neither will Javier Habet, the coach of World FC, the team Chris played for. 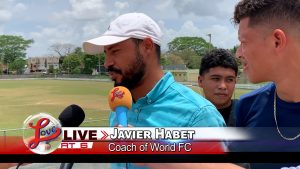 Javier Habet, Coach of World FC: “This kid was here pretty much every day. Even when we didn’t have training he was still here, working on his own personal self. You know? Trying to better himself and it was just, I don’t know. I mean I understand the charging of the pitch but the fee was for the entire team and he was here alone. Just, I just don’t know.”

Vejea Alvarez, Love FM News: The teen’s killing caused an uproar on social media with residents expressing their discontent over his tragic death. One person wrote, “He lost his life just to play football. Wow. Very sad to hear.” Another resident said, “What a senseless killing. Gone too soon. Young man.” While someone else commented, “This is not right, madness, the devil is very busy. Sad, sad, sad, and messed up situation.” And a heart wrenching situation it is indeed, particularly for this father who is still mourning the life of his wife and sister who, in 2016, were killed in cold blood.

Manuel Rodriguez, Father of Deceased: “You know, it’s just been six years since Chris’s mother, Daisy Miralda and Miriam Mai got murdered and we haven’t been, we haven’t recovered from that tragedy. Now we’re all going through hard times still. My mother still hasn’t gotten over that tragedy there now to lose my son. You know, I lost the mother, now I lost my son. You know? Humble guy. All he wanted to do was enjoy soccer. You know and to take his life like that, mien, is very sad.”

Jervi Canté, Athlete: “We grew up playing ball with Chris like from we were small every Saturday’s working out on the *unclear* field just to lose somebody out of senseless, it’s just hard. You know, Chris was my brother off and on the field. Great leader. Every game he gave his heart and soul and now he’s gone doing something he loved.”

Vejea Alvarez, Love FM News: By all accounts, Chris was a promising athlete who his father says lived almost every day of his life with a smile on his face, one that he will never get to see again.

Manuel Rodriguez, Father of Deceased: “I always get feedback from the trainers and football players, from his colleagues and they say “Man, Chris is a good player. You should come over and see him play someday.” You know but, unfortunately, I didn’t attend all the games but Chris was a happy kid. A happy kid, like I said, in the sense that he was just humble you know? You ask him for any favour, he will do it for you. That was Chris. Chris was always happy and I will always remember him as a happy person because we didn’t have any problem as a father and son relationship you know and that’s the sad part of it because they took away his life being humble and happy. How can you do that to someone that is humble and happy? And I’ll remember Chris as a happy person.”

Vejea Alvarez, Love FM News: Despite the father’s heart being shattered into pieces, he says he will be leaving justice in the hands of the Lord.

Manuel Rodriguez, Father of Deceased: “I leave in the hands of God as well. You know whatever God decides they want to do with him, by our pat, you know, we believe in God. So, I’ll just leave it up to God to decide and let the police do their job.”

Vejea Alvarez, Love FM News: Police have detained Tek and recorded statements from numerous witnesses. However, the weapon used in this incident is yet to be recovered. Reporting for Love News, I am Vejea Alavrez.