A father of two was slain a stone’s throw away from his home over the weekend. The incident occurred in the wee hours of Saturday morning and claimed the life of 24-year-old Iwin Palma. His killing is believed to be the result of a previous incident that he was involved in and investigators are seeking one man in connection with Palma’s murder. Reporter Vejea Alvarez tells us more in his report.

Just after midnight on Saturday, the echoes of gunshots broke the silence of a quiet night in the Milpa area of Ladyville Village. When the noise subdued residents discovered 24-year-old Iwin Palma lying dead on the pavement drenched in his own blood. The father of two had just left home a stone’s throw away when he was ambushed and gunned down by a lone gunman. His father, Ricardo, who wasn’t at home at the time, says when he returned the following day he received the heart-wrenching news that his son had been murdered.

Ricardo Palma, Father of the Deceased: “I went out and did a little errand so I didn’t come back home at the same night so I came back early the next day morning and that’s when I got the news that they killed my son. Because my daughter was telling me something that I was trying to figure it out but same time when she was talking to me I saw the police man they came and they brought a phone with the picture on it and asked me if I know this guy here and I told them “Yes that’s my son.” They asked me if I was at home and I told them well I wasn’t at home but I just came home and I got the news from them and my little daughter.”

Palma’s death is believed to be the result of a previous grievance between him and his attacker. Police Press Officer, ASP Fitzroy Yearwood, says that less than two weeks ago, Palma made a police report against a man who he was having issues with. 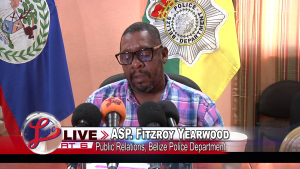 ASP. Fitzroy Yearwood, Police Press Officer: “On the 16th of June Mr.Palma made a complaint to the police. The full contents of that complaint I would not get into but I know that we made an arrest in reference that complaint and we at the police department believe that the person that was arrested for that incident that the two incidents are probably related. So the investigators are looking at that angle and along those lines. Most definitely that is the most recent incident so hopefully by the end of the day we could shed some light.”

Following that report the said individual was charged with aggravated assault against Palma. His father says that he believes the police could have maybe done more to protect his son who was to begin a new job today. 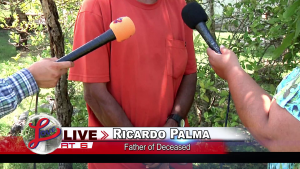 On July 16th Palma would have been celebrating his 25th birthday with his two kids says will now have to face life without him.

Ricardo Palma, Father of the Deceased: “He is a father of two. He has a daughter and he has a son. The daughter is like five years that’s my granddaughter and my grandson is like two to three months so they just took away his children’s love because then they took away the dad and he is the children’s love.”

Palma explained that while his son’s killing has brought immeasurable pain to his family, he will be leaving justice in the hands of the law and the Lord. Reporting for Love News I am Vejea Alvarez.