Earlier in the newscast, we told you about the many land matters that the Minister of Natural Resources Cordel Hyde is dealing with. He has been leading the charge to have thousands of land issues resolved by holding land clinics across the country. The Minister gave us an update. 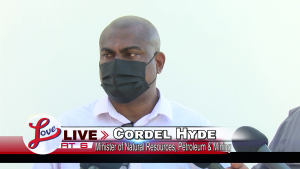 Cordel Hyde, Minister of Natural Resources, Petroleum and Mining: “Lots of it are people who have had problems for a long time. Right now, like last week, we had an internal land clinic at Belize City Lands. Meaning we spent the entire week from Monday to Friday. We didn’t see the public. We just focused on trying to deal with a backlog of maybe 1800 instruments were there. We got through like maybe six, 1500 of them and since Monday, we have had our people calling people to come for their purchase approval, to come for their title and our people who were making calls, they are excited. They cannot believe how extremely excited and happy people are to receive their land papers. They want to take them to lunch. They want to bring breakfast for them. They can’t understand but they’re beginning to appreciate what a piece of land, what a house does for people.”

Hipolito Novelo, Love FM News: What is the estimation in terms of property documents issued?

Cordel Hyde, Minister of Natural Resources, Petroleum and Mining: “The Prime Minister he must have asked, put you up to that. I tell him all the time, I say listen. When we go to Orange Walk, and we’ve been there for three clinics, when we go there, his people still come in to the clinics anyways right? They still find a way to get their things done so we’re saving them for last just like Lake I.”