The farmers in San Carlos in the Orange Walk District have been fervently expressing their growing concerns about their rotting carrots which have led to thousands of dollars in losses. The farmers state that the vegetables were wasting away due to in lack of buyers and an influx of contraband crops. This matter was taken to the meeting of the House of Representatives last week Friday by Tracy Taegar Panton, however, the Minister of Agriculture, Jose Abelardo Mai, refuted her statements. Mai said he had been to San Carlos and no such problem existed and that there was a problem with overproduction. Leader of the Opposition, Moses “Shyne” Barrow travelled to the village and saw rotting carrots. 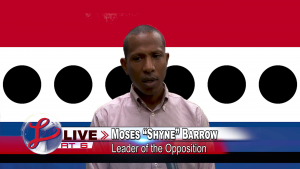 Moses “Shyne” Barrow, Leader of the Opposition: “I was there with the farmers and they’re explaining to me what is a good product, what is a bad product and showing you as you saw on my Facebook post how the crops have turned to flowers and showing how it spoiled, you break it open and they went through what exactly identifies a spoiled product as to a product that could be sold and so what Minister Mai should have done in the honorable House was just to accept that he would go and see for himself rather than lie and accuse the member from Albert of lying and solve the problem. And I’ll tell you what the solution is; the solution is to immediately cease from giving permits for any imports whether it’s Mexican, whether it’s from any other country for any produce that our farmers are selling. The first question should be why not stop the issuance of permits for foreign imports because that would go a long way. Certainly contraband has been a problem experienced by both administrations UDP and PUP, certainly I would opine that the UDP did more to stop the flow of contraband but what cannot be debated or disputed is the fact that this current PUP government, this Minister of Agriculture has the power to stop immediately the issuance of permits. That could happen tomorrow. A policy paper could be issued, a statutory instrument could be issued, that can be done by the minister tomorrow. Contraband is a problem and that will take a greater effort and that will have short term strategies and long term strategies but as it stands the minister could stop giving import permits for produce that our farmers are selling.”