UDP’s recently elected Party Leader, Moses Shyne Barrow, met with Albert’s Area Representative, Tracy Panton to discuss the way forward in the party. Panton, who has been declared the Party’s Chief Whip, will reportedly play a senior integral leadership role as the party begins its preparations for the village, municipal and general elections. Since being elected on Sunday as the Party Leaders several changes have already been made within the red and white camp. Yesterday we told you that both Denton Belisle and Dr. Carla Babb have resigned from the Central Executive and Secretariat. Today, we understand that Roosevelt Blades, who was operating as the National Campaign Manager has now been replaced by Juliet Thimbriel. Meanwhile, several members have been removed from the Central Executive Committee including Ruben Campos, Delroy Cuthkelvin, Phillipa Griffith, Lisbeth Novelo, Carlos Perdomo and Dean Williams. According to an unofficial source, Ivan Leiva has been named as the National Convention Chair; Errol Gentle is the Finance Chair; Orson Elrington is the PR Chair; Shary Medina has been named as the Membership Chair; Sherlett Martinez is the Nominations Chair; Clive Lino is the Rules Chair; Aldo Salazar is the Ethics Chair; Sheena Pitts is the Police Chair; Alobi Young is the Youth Director; Jacqueline Burns is the Women’s Director; Steve Perera is the Legal Advisor; Armead Gabourel is the Treasurer; Gabriel Martinez is the Corozal Coordinator; Marlo Perrera is the Orange Walk Coordinator; Helen Castro is the Belize Rural Coordinator; Ian Jones is the Belize City Coordinator; Miley Garcia is the Cayo Coordinator; Norman Usher is the Stann Creek Coordinator; Norman Usher is the Stann Creek Coordinator and Macario Coy is the Toledo Coordinator. 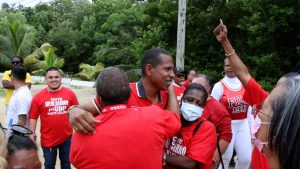