Tonight, the residents of Majestic Alley in Belize City are speaking out against what they say is an injustice for the entire community. Over the weekend, 32-Michael Francis hit a police officer at an establishment in Placencia. Francis claims it was an accident but the Belize Police Department isn’t buying it. On Wednesday, Francis was charged with assaulting a police officer, wounding, and obstruction. He was granted bail but before he could have left the Mango Creek police station he was informed that he is wanted in Belize City for being a gang member. He says he is being targeted. It’s a situation that his community says is an outright abuse of power. Reporter Vejea Alvarez went into the community and has the following story.

Vejea Alvarez, Love FM News: “ On Friday morning, 32 year old Michael Francis appeared in the Belize City Magistrates’ Court to answer to the charge of ‘being the member of a gang’.  He was brought before senior magistrate Aretha Ford and pleaded ‘not guilty’.  His common law wife, Isis Foster, says the charge is completely bogus. She alleges that the police chose to deliberately charge Francis after he made bail in Mango Creek to unfairly imprison him.” 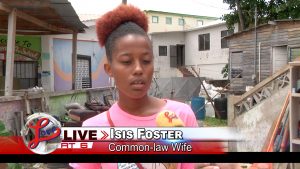 Isis Foster, Common-Law Wife: “Why didn’t they charge him from the previous charges that they put on him? Why wait until he reached Belize City and if he is such a gang member, everyday police pass him, come to wash their car at the carwash.  Why didn’t they pick him up and charge him before this incident? Why wait until he had an incident with a police to declare him a gang member?”

Vejea Alvarez, Love FM News:  “According to police, Francis is a member of the Majestic Alley Crips, but Barbara Antonio, the Principal of Ethel Vargas Pre-school, located in the community, says that if Francis is a part of any gang, it’s a gang of men trying to uplift his community.  Do you think the police charging Mr. Michael Francis for being a member of a gang is an injustice?” 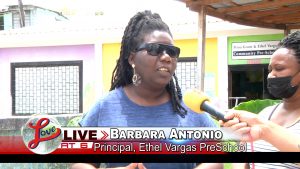 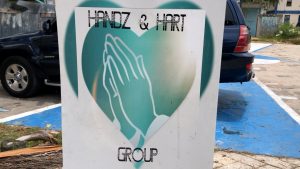 Vejea Alvarez, Love FM News:  “Antonio says she has known Francis for over two decades, and has seen him change not only himself, but the public’s perspective of the community.”

Barbara Antonio, Principal, Ethel Vargas PreSchool: “Many times the people who come to our school would come and say ‘Oh there is a gang here, so I cannot go to your school’, but I tell them that it’s not a gang.  These men are trying to make life better in Majestic Alley. They are trying to change the outlook of Majestic Alley because of Big Mike, because he formed the group Handz & Hart” and he said ‘teacher, I would like to make a difference in Majestic Alley.”

Vejea Alvarez, Love FM News:  “and Francis has been trying to spark change through his ‘Handz & Hart’ community hub.  He’s a member of the community’s teachers’ association as well which was formed with the assistance of educator Guadalupe Beet.  She says that Francis and his group worked closely with the association and have assisted in countless ways.” 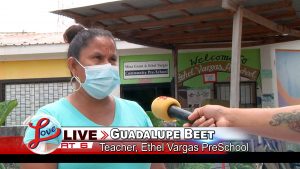 Guadalupe Beet, Teacher, Ethel Vargas PreSchool: “They assist in many ways, for example, when we have the tree planting and we explained to them what we wanted them to do, they willingly cleared the area, they provided the soil, they fenced off the area and they even provided us with some of the seeds so the children were able to plant their seeds individually.  We also, when we had the community helper day, I don’t remember which day in the child stimulation month, we were able, they offered the help, so we can take the children into the green house and they explained to the children exactly how they were performing and how they do with the seeds. They show them the process and the outcome.”

Vejea Alvarez, Love FM News: “According to Beet, when Francis isn’t cleaning up the preschool or handing out food, he’s usually busy working at the car wash where many men in the community are gainfully employed. One of those men is Michael Samuels. He says that Francis plays a vital role in reforming many youth who have had a troubled past.” 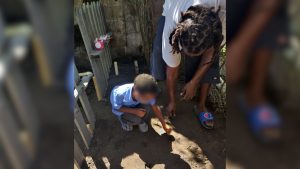 Michael Samuels, Employee, Handz & Hart: “Mr. Francis, as far as I know, he is not a gang member. He mostly looks out for people in the community, and the different works he does brings back money into the community. I am trying to change the community. But, how will you get charged for where you live? How? We can’t go to live in any other area. We are not gang bangers.”

Vejea Alvarez, Love FM News:  “So you are saying that just because he lives in this area they are labeling him as a gang member?”

Vejea Alvarez, Love FM News:  “Residents in the community added that Francis made a public apology to the officer he hit and should not be targeted by police because of that incident. Reporting for Love News, I am Vijay Alvarez.”