A man is in police detention and an entire village in the south is left in shock tonight after the village’s water reservoir was contaminated with insecticide- on purpose! The suspect is believed to have poured large amounts of an insecticide called Malathion sometime between Sunday night and early Monday morning. Villagers first notice that the water was a different color and had a repulsive odour. Soon after, some six villagers began to experience health issues such as vomiting. Village leaders then checked the water reservoir and realized what had happened. The Ministry of Rural Transformation was quickly notified has called the incident a “heinous act”. We’ve been following the reports since last night and we’ve been made to understand that while the patients exhibited mild symptoms, the community was able to help police catch the person responsible for contaminating the water with a chemical that had a foul, pungent smell. The bottle, which is believed to have contained the substance, was found and one person, who is thought to be a mental patient, was detained. Sources, who spoke only on condition of anonymity, told our newsroom that the patients, who showed symptoms of illness were kept overnight for observation and were administered an antidote. Sharing more details tonight is the CEO of the Ministry, Valentino Shal. 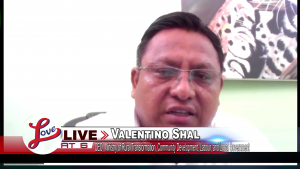 Valentino Shal, CEO, Ministry of Rural Transformation, Community Development, Labour, and Local Government:  “The situation in San Vicente is pretty serious and we are treating it as a serious matter. When we got the report from the community leaders, we responded immediately and when they told us that they suspect it might have been using some kind of chemical agent that somebody may have put into the reservoir and then, you know, that is distributed to the villagers, we felt that that was serious enough that we also got the police involved and thankfully, they responded as well. As to the motive why somebody would want to do that. We are not sure. I think the police are continuing their investigation into the matter. This individual, I understand, is a villager. So why the intent to harm other people is not clear to me and it’s a very rare occurrence. These types of things hardly ever happen in Maya villages down in Toledo. So it’s a very rare case, a very strange case so I guess after the police complete their investigations they’ll probably be able to tell us what was the motive behind this act by this person. We have about six persons who have shown some symptoms, um, and, fortunately, we got the Ministry of Health to send an ambulance last night to pick them up from the village.”

We’ve also learned that samples from the water were taken and now the Ministry of Health is awaiting the results of confirmatory testing. Personnel from the ministry returned to the village today to monitor and assess the situation. Until the Ministry of Health has determined that the water supply is safe again, water will be provided by the Ministry of Rural Transformation. To ensure that a steady supply of clean water returns permanently, the public health inspector in PG, the Southern Regional Coordinator and the rural community development officer have already begun the process of flushing out the village’s reservoirs and distribution lines. CEO Shal says the hope is that the water supply will be restored fully in very short order.

Valentino Shal, CEO, Ministry of Rural Transformation, Community Development, Labour, and Local Government:  “In the meantime, we have sent down substitute vats to store water for the villagers and fill those vats so that they can have fresh clean water until their system can be cleared for use again. It is something for probably the Ministry of Health and other experts to decide exactly what chemical agent. We suspect it is some insecticide which is available there because it’s an agricultural community. But the potency and the quantity that was used to contaminate the reservoir we are not sure but it appears to be in sufficient quantity for people to notice something was off with the water.”

Hipolito Novelo, Love FM News: And how many villagers are there in San Vicente?

Valentino Shal, CEO, Ministry of Rural Transformation, Community Development, Labour, and Local Government:  “Um, it’s not a very big village. I’d say between 350 to 400 people live in the village and so we need to make sure that this number of people have water and that’s precisely what we’re doing.”

Hipolito Novelo, Love FM News: The possibility is that over 300 persons could have been poisoned because of what happened?

Valentino Shal, CEO, Ministry of Rural Transformation, Community Development, Labour, and Local Government:  “Yes the entire village was exposed to this risk because of this act by a single individual because the system feeds the entire village with water and the villagers depend on this system so, yes, the entire community was exposed to considerable risk because of this act by this one person.”

Hipolito Novelo, Love FM News: And this is a serious crime. Can it be described as domestic terrorism because you are contaminating  a water system that over 300 persons use? He may could have killed persons there.

Valentino Shal, CEO, Ministry of Rural Transformation, Community Development, Labour, and Local Government:  “Well, I don’t know. You see terrorism is a word that is used to describe acts of violence for political reasons and I don’t think that that is the case here. So it is definitely a criminal act and, of course, that is why the police have been called to look into the situation but the motives are, we’re not sure exactly why this individual would do such a thing.”