Twenty-six-year-old Julian Henry is tonight sleeping at the Belize Central Prison after his bail application was denied today at the Belmopan Magistrate Court. Henry is the man who fatally shot his friend, 21-year-old Daniel Orellano, accidentally on Friday night. The men were at a residence on Mariposa Street in Belmopan when the tragedy occurred. Henry told police that he stumbled while cleaning his license shotgun and accidentally fired the weapon. He was represented today by Attorney Richard Dickie Bradley. 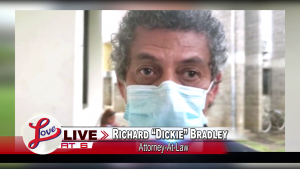 Richard “Dickie” Bradley, Attorney for Julian Henry: “He was having problems with the shotgun minutes before he and his friends were to take off on Friday evening many miles inside of the bush. There was somebody that came to the side of the house. He could not see who it was because the aluminium windows were closed and where Julian was standing, he turned around and there was an elevation that dropped where the floor is built. In fact he turned around when the person had shouted and he thought a friend was heading to the door when the elevation caused him to stumble and the dratted shotgun gone off and instead of one sole slug going up in the air, it hit the person in the back of the head, side angle. The Magistrate in the Belmopan court is of a different view and feels that she is not in possession of the authority to grant him bail. In fact, curiously enough, Julian was detained in police custody from Friday evening, which would mean that he had to sleep in less than satisfactory conditions Friday night, Saturday night, Sunday night and Monday night. The Constitution says you must bring somebody to court no later than 48 hours and he was brought today and he will be sleeping in another unpleasant and unsatisfactory situation until he makes an application to the Supreme Court.”