The school system in Belize is doing its best to return to a sense of normalcy, last seen prior to a nation shutdown in March 2020 when the COVID-19 pandemic began. Right now, even as students get ready to break for the summer, instruction is a mixture of both face-to-face and some distance learning. However, the sad reality is that many children lost out on a lot and there are sizable gaps in math, English and the sciences. Because of this, Minister Francis Fonseca explained that a lot of students will be repeating. He also talked about a program that will also help. 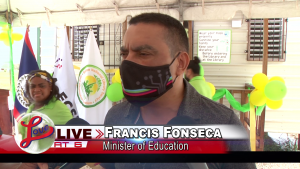 Hon. Francis Fonseca, Minister of Education: “In many schools across the country, we’re talking now primary schools and many schools across the country students will have to repeat and do an additional year and it’s true also at the secondary level in lesser numbers but no such instructions we would not engage in that, that would be foolish. It would be misguided. We have to understand where students are, what they have lost and we have to work on addressing those gaps that have been identified. Generally those assessment tests are establishing very clearly that our children have fallen behind particularly in the areas of math, science and english. Those are three critically important areas so there’s a lot of work to do. It’s no surprise to us we knew that we just wanted to really validate that sense that we had with data and information and we’ve done that. So there’s a lot of work to do but we’re taking immediate steps to address that issue. We’re launching very shortly a summer program a loss mitigation summer program across the country that will target directly those learning gaps that have been identified. We’re working with master teachers, we’re taking on some retired teachers who will work specifically work with these students throughout the country on addressing those learning gaps that have been identified.”

The Ministry of Education says it hopes that when the academic year starts in August, classes can resume a five-day school week.