Tonight, a haven for women and children affected by domestic violence is no more after it was destroyed by fire. The blaze broke out just after one o’clock this morning on Church Street in San Ignacio Town and consumed the wooden two-story structure. The incident is believed to be the result of a malicious act carried out by a man with alleged mental issues. Reporter Vejea Alvarez with the help of Cayo Correspondent Eliu Yacab has the story.

Vejea Alvarez, Love FM News: After years of providing refuge to women and children displaced by gender based violence, the safe house owned by Mary Opens Doors is a pile of ash and rubble. Just after 1:00 this morning the wooden two storey structure went up in flames. Luciano Tun who lives next door, says that when he was alerted of the fire, he made a valiant effort to extinguish the blaze. 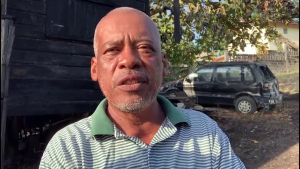 Luciano Tun, Neighbour: “I was awakened by my neighbour, Rose, who lives in Mary Opens Doors, and she told me that a fire was under the house and when I noticed, the house was on fire. I tried to get a bucket or a hose to help her but it was impossible because the house was already in flames. So I tried to manage to see what I could do but it was impossible because the fire was too, too high already to be outed and I tried my best but I couldn’t do nothing.”

Vejea Alvarez, Love FM News: The fire gutted the entire building, built in 1954, and all of its contents. Area resident, Rose Buckley, says that earlier in the day, a man believed to be mentally challenged was caught setting the stairs to the building on fire. 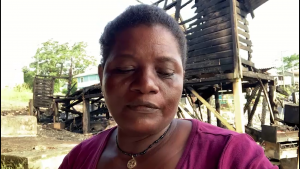 Rose Buckley, Area Resident: “Well since yesterday, they have this man that lives downstairs of me by the name of Johnny Mai, or Logan I guess he goes by. He was acting very weird from two to three days ago and I was monitoring it and I tried to get to the people that are in charge of the organisation and they didn’t answer me. Well yesterday, Ms. Anna happened to answer me but she told me the guy is on medication. I didn’t know he was a mental patient but he was doing weird things yesterday and I tried to get to the president to come and assist me to see what they can do about him and then he was lighting the step on fire and the neighbour saw it too as the witness and I came to out it yesterday.”

Vejea Alvarez, Love FM News: To Buckley’s surprise, just hours after putting out the fire she had witnessed, a second attempt to set the building ablaze was successful.

Vejea Alvarez, Love FM News: While the official cause of the blaze is yet to be ascertained by the fire department, Tun says he must commend the first responders for saving his home from a similar fate.

Luciano Tun, Neighbour: “Luckily I didn’t lose anything but the house caught on fire. Due to the arrival of the fire engine personnel they managed to out the fire that was, because my house had already caught fire. You know, on the side that was close to the house and then if the fire person didn’t act professionally and rapidly, it was going to burn down along with the other house so, thanks to them it was saved and I appreciate what they did and thankfully, only my vehicle got damaged.”