Resign or be removed: that’s the ultimatum Deputy Mayor Micah Goodin has been given by his fellow councillors and Mayor Bernard Wagner. This is after the Belize City Council voted to have him removed from the Deputy Mayor post. Yesterday, the council met in caucus and a motion was tabled to give Goodin the chance to resign or be voted out in two weeks. According to Belize City Mayor, Bernard Wagner, when the motion was presented by Councilor Albert Vaughn, Goodin walked out of the meeting. Wagner says that Goodin’s actions were unbecoming since he was made aware of the motion before it was tabled.

Bernard Wagner, Mayor of Belize City: “Full disclosure was given to him because it was on the agenda and Councilor Vaugn was the individual or the counselor that brought the motion and he gave all the councilors due notice, the twenty four hours notice that I will be bringing this motion to ask for removal of the Deputy Mayor and so the Deputy had full disclosure then and so he attended the meeting, was in the meeting right up until that point when councilor Vaughn brought the motion to the table and he left. Again that’s his call but what I think he lost was an opportunity to really speak to his colleagues in respect to having them hear his side of the story. He chose not to and that’s his decision.”

Reporter: Have you met with Councilor Goodin since you’ve returned from Barbados ?

Bernard Wagner, Mayor of Belize City: “No I haven’t had the chance to meet with him. I’ve been in and out of meetings. It’s an unfortunate again that he chose not to reach out to myself. I always have that open door policy but again everyone to his own.”

The council’s press release stated that (quote) “we cannot divulge the details that prompted this decision, nonetheless, we assure residents that Deputy Mayor Goodin engaged in a series of actions that do not align with our core values.” According to Mayor Wagner, those actions included far more than his involvement in the recent shooting incident where a shadow councilor was injured. He says that the council believes Goodin was leaking sensitive information brought up during caucus meetings. 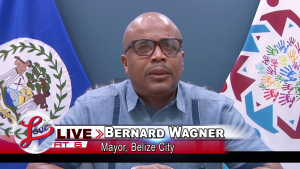 Bernard Wagner, Mayor of Belize City: “It’s not only the incident at the nightclub. It’s a series of events in respect to confidentiality and sanctity of the caucus. The caucus is something as a Cabinet and when you have events where the sanctity of documentation that is passed through the caucus is being continuously leaked out into the public domain that certainly doesn’t really help the progress of the council. We are a very transparent council and everything is on the website. If you go on our website you see all the minutes of all our meetings so there is no need to be actually leaking out documentation to the public. The public will have access to all of those via our website so a series of events that really is unbecoming of a deputy mayor.”

Reporter: So it’s the case that the councilors believe Councilor Goodin was leaking information ?

Bernard Wagner, Mayor of Belize City: “We saw what happened in the past week and in respect to the documentation that were in the public domain that is caucus matter, confidentiality and so it’s unfortunate again that we have to come back to this same table and I believe that the council members it’s not Bernard Wagner again but everything will come back to Bernard Wagner. It’s the council members saying listen due to all these misjudgments we don’t feel that you are fit to hold the position of the deputy mayor and so what they have done is essentially just triggered the process and again they have just triggered the process. In fourteen days they again the same councilors will determine who they want to be as their Deputy Mayor not Bernard Wagner.”

Wagner has made it no secret that he and Goodin have not seen eye to eye for several years. That feeling seems to be mutual on both sides because in 2018 during a caucus meeting Goodin said (quote) “However, I will not be seeking re-election in 2021. Additionally, I am contemplating resignation. I have lost all confidence in Mayor Bernard Wagner.” (end of quote) Given the recent decision to have Goodin removed, our newsroom asked Wagner if he expects this tension between them to increase.

Bernard Wagner, Mayor of Belize City: “If you listen to the text of that message he speaks about power and I’m not about power. I’m about service to the people and I will serve the people in a transparent and effective way and that is all I ask from my councilors. Let us be leaders that carry certain values and so that’s his how he looks at me. I don’t look at him that way. I see a young man that wants to really lead but does not know how to do it.”

Reporter: He has lost all confidence.

Bernard Wagner, Mayor of Belize City: “Yeah and it’s a pity. I never wished that for any one of my colleagues. I look at all my colleagues as students, I am the senior here. Most of them are very young individuals and I see them as my students. I see them that I can impart knowledge to them, leadership skills to them and I always try to be that type of voice that speaks clarity and that speaks of humility but when you speak about power I am not part of power. I prefer being in the background, I prefer doing the work for the people, if I don’t get any praise that’s fine with me but that’s how he feels I can’t be taken aback by it.”

Reporter: And what happens if he decides to resign from his elected post ? Is that something that you guys believe he might do and if he does that what happens ?

Bernard Wagner, Mayor of Belize City: “Well the City Council Act speaks to what would trigger that type of event. I have never really contemplated it but you never know in these circumstances. That is his decision again and that’s all I would say on that.”

The United Democratic Party (UDP) has sided with the council and is calling for Goodin’s resignation. In a press release the UDP notes that (quote) “Goodin and friends forced residents of Belize City to endure a horrifying and traumatic ordeal…..this alone should be enough to warrant Goodin’s removal from the council.” (End of quote) Love News reached out to Goodin for comment. We are still waitint to hear back.