The so-called gang bosses of the Mayflower Area, Tyrone and Ellis Meighan, were remanded to the Belize Central Prison this afternoon. Over the weekend the duo was apprehended in the State of Quintana Roo after failing to provide proof of legal entry into Mexico. As a result, the brothers were deported to Belize. The deportation, however, was just the beginning of their legal fight. Once in police’s custody, the men were detained on the strength of a bench warrant for skipping court on March 16, where they were to answers for charges of being a gang member. Their Attorney Norman Rodriguez says that the men were ambushed by the prosecution and unfairly treated in court. Here’s how he explained it. 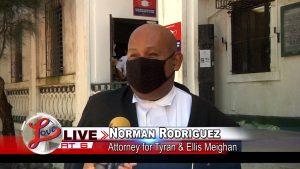 Norman Rodriguez, Attorney for Tyran & Ellis Meighan: “The young men did not show up on the 16th for their court date. This matter has been in the court for like two years or a little more and they’ve always been here but they miss this one appearance and a bench warrant was ordered for them. At the time the bench warrant was ordered, they were at the immigtaion post in Corozal. Apparently or allegedly they had been transferred to Belize from Chetumal where they had gone for a short visit. They were brought into Belize City and yesterday an application was made by the prosecution for them to be remanded to the Hattieville prison until their trial date under Section 40-3 of the Summary Jurisdiction Procedures Act.”

Reporter: So you’re saying that your clients weren’t on the run from police because that’s what the reports are saying? These men were trying to get to the U.S. and they were running from the law.

Norman Rodriguez, Attorney for Tyran & Ellis Meighan: “It is anybody’s guess. If someone appears every ordered appearance for two years and misses one, it is anybody’s guess as to what they would want to believe. I can tell you for a fact that no evidence was brought in this application to show their intended, in fact to even show that they were abroad. Because the evidence brought, the prosecution attempted to ambush us, which is something that is not tolerated in law and we stood up against that and we made objections and those were successful so there was no evidence. The evidence that the prosecution attempted to bring were photocopies of documents authenticated. So there is no evidence. It is your guess. It is my guess. It is every Belizean’s guess. I know that people will have their own opinion but at the end of the day, I have to focus on this issue and this set of circumstances.”

Attorney Rodriguez alleges that the prosecution unfairly slapped additional charges on his clients, and according to him, the brothers were in Mexico to purchase medicine for one of their children.

Norman Rodriguez, Attorney for Tyran & Ellis Meighan: “Apparently they had gone to get some medication for one of the brother’s young baby who is very ill. Suffers from some kind of illness and throughout this COVID-19, the worst time to have the COVID-19, they were ordering this medicine from Chetumal. They cannot go anywhere in Belize. This is Belize. They are Ellis Meighan and Tyran Meighan. Well I can’t say what they are. I am focussing on this set of circumstances like I told you but they can’t go anywhere here because if they’re not harassed by other people then the police might just be out to get them. In fact, let me tell you this. They just, they had just finished hearing, the court had just finished hearing this application and was about to make its decision and here comes the police with two other charges right – disobeying a judicial order. Almost the same thing that the court would have heard by dealing with the bench warrant that was before, that they were brought in on.”

The brothers are to return to court on April 5 to answer to the charge of being a member of a gang. 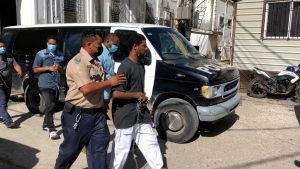