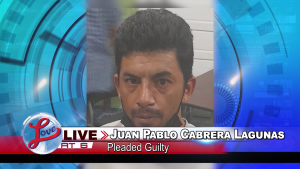 35-year-old Mexican national Juan Pablo Cabrera Laguna was arrested and charged with one count of possession of controlled drugs with intent to supply to another after he was busted with methamphetamine. Police officers and BDF soldiers were conducting a patrol yesterday afternoon near the Ramonal area of Patchakan Village, Corozal District when they observed Cabrera. Cabrera was standing in some bushes and when he saw the police, he ran away. He was later detained and on his person, officers found four bags of crystal meth weighing 8,913 grams. Cabrera pled guilty and was remanded to the Belize Central Prison.