Also participating in finalizing the counter-memorial is former ambassador, Alexis Rosado. Rosado relinquished his overseas postings after he was criminally charged with rape, sexual assault and aggravated assault. But even so, the government decided that it is best to keep Rosado as co-agent. Today, UDP Chairman Michael Peyrefitte who is participating in the preparatory process says that while no one is beyond expendable, Rosado’s knowledge and expertise are invaluable. 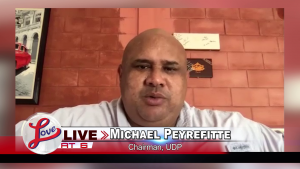 Michael Peyrefitte, Chairman, United Democratic Party: “Ambassador Rosado was there acting as co-agent along with ambassador Asaad Shoman and we worked to on the memoriam*. I don’t think that anybody is totally beyond being expended but I will just say that as far as his knowledge, his expertise, and his approach to the Belize -Guatemala issue his knowledge and efforts and contributions have been invaluable. We depend on him so much, he was the ambassador to Guatemala for so many years so whenever we would have gaps in the way the Guatemalans are thinking or gaps in any places of knowledge he would always be there to fill it in so on that end I can say for sure that his contributions have been totally invaluable.”