The Belize Bus Association was prepared to shut down the transportation industry with a countrywide strike if their demands were not met. Minister of Transport Rodwell Ferguson told the media today, that the BBA are happy at the moment, after they heard of the paper to be presented to Cabinet. He explained that it won’t be a standard increase but rather a tiered approach.

Rodwell Ferguson, Ministry of Transport: “Actually since we took over the Ministry of Transportation, we are the most important ministry to the bus association. They compliment us that every time they request a meeting we make ourselves available. So with the rise of fuel over the last many months because of the war in Russia and their neighbour, the price of fuel is almost maybe $14 a gallon and the bus people are saying that they’re not making any money and you know that the prices are regulated. Only the Ministry of Transport, through the Cabinet’s approval, can raise the price or decrease the price of fuel. So we are going back and forth for a month, for a week and unfortunately, the Prime Minister was out of the country for one week so there is not cabinet really for two weeks and so all I asked them was for patience that I as a Minister responsible for transportation cannot arbitrarily say ok we’re going to raise the price without Cabinet’s consent. So they came. They continued on Saturday with the CEO for about 4 hours  and I guess they didn’t come to terms and so when I came in on Monday morning I had several meetings but I took time out to meet with them and we had a discussion and back and forth again and we explained and the CEO, over the weekend, draft several tables so we can go forward and after we showed them the table then they agreed that they just have to wait a little until Cabinet is ready for us. But we are telling them to put their papers together and take it to Cabinet and see what it Cabinet’s positions in the raise in the price of fuel. But what we are saying then if the price of fuel continues to fluctuate and it goes back down then we do a tier approach. So if it is at $14  then we’ll say ok, the increase is that. If its goes back  to $12 then it goes back to $12 because the price went down. So we came up with the best scenario. I think they are very happy and we went back and they said ok let’s wait until after tonight and Monday of next week.”

Fixing the BBA’s issue could possibly create a pushback from commuters. That’s because no one really wants an increase in anything at the moment, especially in bus fares. But according to Minister Ferguson says, not everyone can be satisfied.

Rodwell Ferguson, Ministry of Transport: “If you look at the thread on Facebook, the commuters are saying that they want better buses on the highway and we don’t mind paying the price if we get better transportation in this country. So I believe that the commuter might erupt because they said that you are increasing the price for me and then the buses are still old and inadequate. So we hope that we can balance the act as we go along and see how quick we can resolve it.”

Reporter: Do you expect that Cabinet will be cautious in recommending or the approval if the bus fares continue to  increase because of the political blowback that it might receive because if bus fares go up I will blame you and I will blame the government. That’s the public’s view.

Rodwell Ferguson, Ministry of Transport: “Well that is fine but I can’t talk for Cabinet. I am only one member so let us see what will happen after Cabinet on Monday, what will be their decision.”

Reporter: But would you agree that the voters in your constituency would be upset if bus fares go up?

The cost of fuel is only one factor that Minister Ferguson is trying to address in the transportation industry. Today, he reminded the media that he is on a mission to transform the industry. He added that he is ‘skillfully’ negotiating on behalf of bus operators to obtain loans to purchase better buses.

Rodwell Ferguson, Ministry of Transport: “When I took over the ministry, I didn’t mince any words. I said that we are going to upgrade and improve the transportation system and I told every operator to get prepared for it. I guess maybe it caught them off guard because initially I said June 2022. I extend it now to December 2022. But beside that,when I negotiate, I negotiate for everybody collectively. I’ll give you an illustration. Well you know there is a change of school bus operators when the Government changes and normally lending institutions don’t want to lend them money because then they get a two year contract from the Ministry of Education. I was able to negotiate for them with the National Bank for a four year period of repayment and so they all got a loan from the National Bank to purchase their buses because I was skillfully there to negotiate for them and I don’t want to make any noise right now but I’m skillfully negotiating for all the bus operators across this country and that’s why they are very happy. Right now we are doing an assessment on our whole transportation plan going in the Ministry of Transportation. So we don’t want to give some maybe two years permit and then at the end of the day we have to figure out what is the best way forward. When we discussed with the bus operators a couple days ago, I told them they had to fix the industry and was very frank. Too many buses on the highway, nobody’s making any money so we have to figure out what is the best way to streamline this industry so that we can see an improvement and likewise the operators making money. So if somebody will have to go, at the end of the day, somebody will have to go but that will be between ourselves and the bus operators. I will also take it up with Cabinet. If we’re going to bring more buses then expect that we get some relief from the exemption. So it won’t only be for Floralia. It will be across the board if Cabinet approves that you know, we are going to give this exemption so you can get better buses. At the end of the day, Government is going to make more money from it because when they bring in these buses 20 years old, the duty is maybe only $3000.” 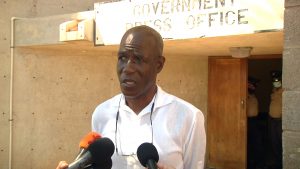