On Wednesday afternoon the Government officials met with leaders of the Joint Union Negotiating Team. The meeting was held at the House of Culture in Belize City where union leaders were provided information about the country’s economic status. After the meeting, union leaders expressed that there weren’t necessarily satisfied with what was shared and requested that additional information be provided before the next meeting on February 16. Deputy Prime Minister and one of GOB’s lead representatives in the meeting Cordel Hyde says the exchange was fruitful and informative. 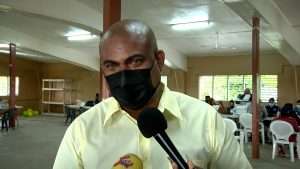 Cordel Hyde, Deputy Prime Minister: “We had a good meeting. A short meeting by our standards. It was only four hours but I think we had a really good meeting. Our meetings are always fruitful, always engaging, always cordial always frank and so we shared with them the numbers that we had up to I believe up to the end of November with projections up to the end of March. Last year when we had to do what we had to do we had given an undertaking that annually we would review and analyze the data with a view to returning to the status quo and soon as possible making sure that we don’t have this salary adjustment any longer than we needed to and so that process started in earnest a couple days ago. The unions and their people are going to go through the unions and in three weeks time we’re going to meet and I think it’s February 16th and we should make some headway then. “

Also in attendance was Minister of Education, Francis Fonseca. He said that the government is working on fully restoring the salary cut.

Reporter: Were you part of the joint union meeting this week?

Reporter: Do you think it was successful?

Francis Fonseca, Minister of Education: “I think it was a very good meeting. I think it was a very good meeting. We met the purpose of our meeting was to update the joint unions on the state of our financial affairs, bring them up to date so we provided a very comprehensive report to them on the state of our nation’s finances and of course we discussed the issue of the salary cut. The unions very much of course want us to get to a position where we can fully restore that salary cut and the government is of course committed to doing that as quickly as possible. We have said that from the very beginning so we are working very hard on that and I think it was a very positive very productive meeting. We will meet again on February 16th and we believe at that meeting we will be able to finalize a very clear position moving forward on that issue. I think they accept and understand that we are working with them on the basis of respect. That we are being as open and transparent as possible. We are trying to share everything with them so I think they appreciate that it is a good-faith effort on our part to try to work towards a common objective.”