Responding to the UDP today was Cayo South Area Representative Julius Espat. Espat sent a lawyer letter to PC Alicia Trapp. In that letter, Espat’s attorney Senior Counsel Andrew Marshalleck tells her that the statements she made are (quote) “patently false and constitutes a grave libel upon our client. While you claim to have several witnesses who are willing to be witnesses to a criminal trial, if necessary, we are to say that our client is in possession of photographs and video of the surrounding events showing your behavior and indeed has witnesses in the hundreds willing to testify that there was in fact no such verbal or physical attack by our client.” End of quote. Espat told us more via phone today: 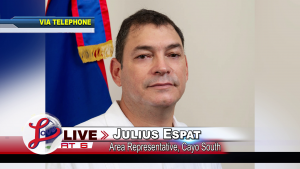 Julius Espat, Area Representative Cayo South: “I still stand by that. I definitely did not assault her. I think the opposite happened. The truth is, I was standing out there on our side. She was standing under the tent of the UDP side. A supporter of mine took a picture. She got mad and came over and aggressed us. That is when I told her, ma’am you are a police officer and you should not be out here campaigning for party politics. I know that she is a police officer because she is commissioned to be the security for us at Cabinet and that’s as far as I will go with that and one last thing, please also be reminded that she is also the wife of the UDP candidate that was running that election.”

Hipolito Novelo, Love FM News: She says that you verbally and physically attacked her.

Julius Espat, Area Representative Cayo South: “Well if anybody can prove that I physically attacked her. This starts reminding me of Amber Heard and Johnny Depp. I mean what’s happening now? How can I physically assault somebody out there with so many witnesses? How is that possible?”

Hipolito Novelo, Love FM News: She wants the police officers to charge you, criminally charge you for assault.

Julius Espat, Area Representative Cayo South: “Well I know what the UDP would like to happen so I can understand their point of view but that’s fine.”

Hipolito Novelo, Love FM News: In an interview with the Chairman of the UDP this morning, he mentions that he wouldn’t doubt that you would have behaved in that manner seeing who you are. What’s your response or reaction to that comment?

Hipolito Novelo, Love FM News: Do you fear or are you concerned that you might, may, be charged criminally?

Hipolito Novelo, Love FM News: Witnesses which they say they have.

Julius Espat, Area Representative Cayo South: “Yeah, but who? Any UDP will. The UDP does something. That’s politics on the day. It’s not witnesses. But we’re not afraid because I mean, come on.”

Hipolito Novelo, Love FM News: Because the suggestion being put out there is that the police want.

Hipolito Novelo, Love FM News: Because the suggestion they’re pushing is that you won’t be charged because you’re a sitting minister.

Espat is asking that Trapp apologizes and retracts her statement forthwith.