Prime Minister John Briceño and Minister Jose Mai will be heading to Guyana in the coming days to start fresh trade relations with CARICOM. We’ve reported on this newscast before about the challenges Belizean poultry farmers face to get chicken into the region and the trade dispute involving Trinidad with brown sugar. These matters, according to Minister Jose Mai, are examples of reservations he has with trade within the community. He concedes that while relations with CARICOM are important, Belize should work at improving trade relations in Central America and Mexico. 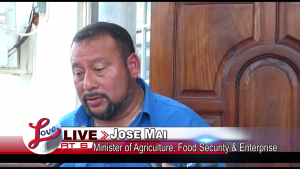 Jose Mai, Minister of Agriculture, Food Security and Enterprise: “Well, I have said this in previous interviews, that we have lost all confidence when it comes to trade to CARICOM. I mean, and I have said this before a number of times. I’ve said it in the House of Representatives. I mean, Guatemala has 18 thousand, 18 million people- Mexico with 123 million- El Salvador with six and a half. The future of Belize lies in Central America. So, while I love our CARICOM brothers, they are supporters, we are a part of CARICOM, because of our constitutions, it’s embedded there, they supported us when we wanted independence, but when it comes to trade, I have huge reservations. So, we’re not saying we won’t trade with them, but we are saying to them if my brothers in Central America and in Mexico are extending the olive branch to us in terms of trade, we will accept it, definitely.”