The sugar crop is well underway in the north not without contention and some hostility. You may recall the recent impasse that occurred between the sugar cane farmers and the BSI/ASR which required the Prime Minister’s intervention. Despite the current deliveries underway, there are still many challenges within the industry that the Ministry of Agriculture, Abelardo Mai says need to be fixed once and for all.

Jose Abelardo Mai, Minister of Agriculture, Food Security and Enterprise: “Sugar industry has been I think in my ministry a very difficult industry. You’re dealing with 5300 cane farmers, you’re dealing with four associations, 1 miller in the north, 1 miller in the West,  another association in the West, some few farmers in the West, 5300 different minds, a 40 year industry probably 50 owned by the colonial people at one time period you have a 40 year old sugar industry act so all this has caused a lot – the disappearing preferential prices, the high cost of production all this is one basic fundamental thing: the prices being paid to farmers. The farmers are not making money they will say hold on I’m not happy with what you are paying me, I’m not happy with your costs, why are you producing more cane, you should produce less cane so you can buy a my cane and pay me more. So everything at the end of the day it is a business so just as the miller is a businessman or are business people the farmer is a business person.”

Minister Mai went on to explain on today’s Morning Show that it is the hope of the government that some mediation will have to take place.

Jose Abelardo Mai, Minister of Agriculture, Food Security and Enterprise: “I believe that the Prime Minister, the prime minister’s intervention was very effective, it was difficult but we did manage to get an understanding at least up until the 10th of July.

Ernesto Vasquez, Host, The Morning Show: But this is  kicking the can down the road.

Jose Abelardo Mai, Minister of Agriculture, Food Security and Enterprise: “You can look at it from that angle but the important thing that while the can is rolling down the hill something else is happening in the negotiations the farmers have to define what is it that they want. They have proposed some new things to ASR. ASR says no that won’t work but yes I agree with you and so the Prime Minister has said over and over again the problem is not the price of sugar or the price of molasses. I can tell you right now what the price of sugar is in the world market on different markets – number 11 market, next market whatever, and I can tell you how much the price of molasses is because there are only two buyers of molasses two. What I cannot tell you is what the cost of operations is. I cannot verify so the farmers have to be very strategic in what they want. Now we are right now at this process working on modernizing the sugar industry act. It can be that with latency listen you need to show the farmers what your costs are, your true costs because there’s costs and then there’s true costs and that has to have some type of verification. It could be.

Ernesto Vasquez, Host, The Morning Show: But doesn’t international law and international agreement step into place this is a private company you don’t have to open your books.

Jose Abelardo Mai, Minister of Agriculture, Food Security and Enterprise: “That’s the reason why ASR has said hey I don’t want to be legislated, I don’t want to be regulated by the government, leave me alone in the boxing ring let’s move the referee out and leave the farmers in one corner and put me in in the next corner.’ But we all know that this is not the principle of this government, of this party. We have to look after the small people. This is not the republics where the multinationals will come and abuse small people because there is nobody to protect them, this is not the case, that is everything contrary to what we stand for.“ 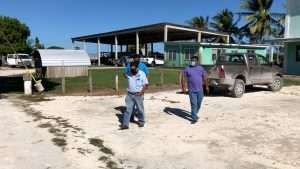 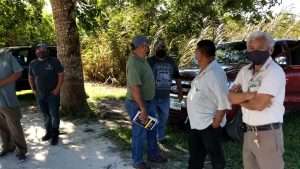