The most recent battle within the sugar industry involves the Corozal Sugar Cane Farmers Association. Their plight has to do with the election of a new Chairman. The report is that Chairman Vladimir Puck has refused to call an election and therefore the recently elected Chairman, Everaldo Uk took matters in his own hands and called an election on Sunday. There are conflicting reports as to whether Sunday’s elections had the required quorum to make it valid. Minister of Agriculture, Abelardo Mai spoke on this matter saying one of the contributing factors has to do with the 2019 constitution that is still before the court.

Jose Abelardo Mai, Minister of Agriculture, Food Security and Enterprise: “Yesterday was another standoff. There was another extra now these members that are calling that election went out, gather quorum had an election, appointed a new committee of management and they wanted to take over their offices there by force and I said to them that will not work we don’t do things like that. If you believe that you acted within your bylaws, you had an election, then write to the committee of management saying guess what there was an election, these are the new people,  kindly we are sitting a date for you to hand over, you don’t take over things by force. They finally listened to me and they went home. We understand that those that are all signal are going to a court now for an injunction so—”

Ernesto Vasquez, Host, The Morning Show: And you follow the bylaws.

Jose Abelard Mai, Minister of Agriculture, Food Security and Enterprise: “Exactly but what they did I think when they were trying to call elections – well they were using COVID, they said ‘oh we can’t have elections because the Ministry of Health said no.’ the Ministry of Health sent a letter saying you can have an election providing you follow the measures.’. They said ‘I haven’t received that letter yet.’ and then they said ok we’ll change the bylaws, but to change the bylaws you need a general assembly which is in the bylaws. There was not a quorum, they could not have changed but they did change it now that new set of bylaws, the amendment of the bylaws are being challenged in court right now that 2019 amendment is being challenged in the court right now. So the ousted ones are using in 2019 bylaws.” 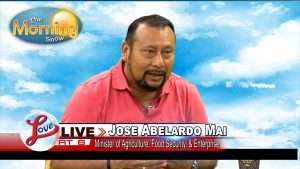