Minister Mira also spoke of the June 14th video that went viral on social media. The media reportedly leaked by a soldier shows unpleasant food supposedly prepared for the soldiers. Mira says that was the work of mischief-makers. 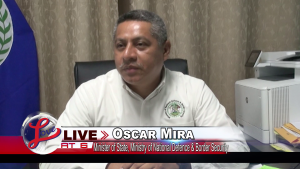 Oscar Requena, Minister of State, Ministry of Defence and Border Security: “All I can say is that it is mischief. We have very highly trained cooks and chefs in the Belize Defence Force and they would never serve the BDF soldiers anything like what we saw in those videos or pictures. There are units that would go and get food in containers because they are out in the fields or they are outside of Price Barracks but no chef in their right mind would mix everything together. I think it’s just mischief I believe and from experience I know that after everybody is done eating they just take everything and put it back together in one container and that goes to the garbage whatever is left. I do not believe in any way that this is the standard that the Belize Defence Force is serving food to the soldiers right now. I just think it’s mischief and unfortunately in this age and this time of technology you know you can get a picture and interpret it in any way you want.”