The media caught up with Minister Kareem Musa at Old Belize, where reggae artist Buju Banton spoke to gang members. The event was coordinated by Leader of the UDP Moses “Shyne” Barrow and in attendance was UDP Chairman Michael Peyrefitte. The joining of efforts came a day after the UDP demanded that the failed Kareem Musa Project be put to an end. So was it all a political gimmick? Or did the UDP have a change of heart? The media asked Peyrefitte:
Michael Peyrefitte, Chairman, UDP: “Well I don’t change my mind on that but if the party leader tells me to meet him here because we have a chance to reduce violence in the city and Minister Musa is here, what am I going to do? Beat ah up? Have him beat me up? No, we have to try and find a solution so if a solution comes even in the presence of Minister Musa then a solution comes. If he is responsible for solving crime, if he is responsible for making sure that people don’t live in fear well then I’ll give him credit for that. I have no issue with that. Part of the problem is when we meet like this, we only meet in a time of crisis. I think we should have regular community meetings, not just with influencers but with everybody from the community to find out what’s going on, what the issues are, the way to move forward to a peaceful city. So, I don’t think that we should only meet like this. I think we should meet regularly and if you have a committee that’s comprised of various different people from interests and backgrounds that can only help towards a solution. I’m not worried about what he says in the National Assembly. I’m worried about what we need to do to have our young men stop killing each other and for all of us to stop dying so young. I will look at what people will do and based on what they do that’s when I’ll pass judgement.”

As to the crime issue, Minister Kareem Musa told Love News that the PUP government through the Leadership Intervention Unit has garnered the support and buy-in of civil society, the churches, and the business community all of whom believe that fighting crime is not a political issue but rather everybody’s business. Musa says that Belizeans can easily spot distractions and mischief-making, especially on serious national issues. He says that his ministry is willing to work with anyone who is committed to the cause. 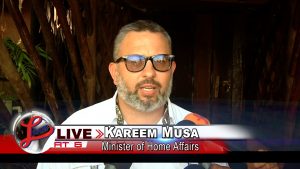 Kareem Musa, Minister of Home Affairs: “Leaders today, like I said Isani, cannot have their ego stand in the way of progress. If I was that type of person, I would say “No, I noh waah meet with Shyne today. They just said they want I resign fi di umpteenth time.” I did that in opposition as well. I think that we have gotten to a point right now where everybody is starting to realise it is this unified approach, this bipartisan approach that would possibly yield good results and so I am willing to work with anybody. I’ve said this in the National Assembly. Anybody who is not there to undermine this particular approach, I am willing to work with regardless of egos because I don’t have one. I don’t have that type of ego. I am one of the most accessible of ministers when it comes to giving an interview. I can’t dictate what the press wants to ask me, If you all want to ask me about cannabis, that’s what you will ask me and so I will respond to that and so I don’t know if it’s because I had called the Leader of the Opposition absentee when he was travelling why they are now calling me absentee, I don’t know but I don’t think anybody out there would support that particular statement. Those tips come straight out of our Leadership Intervention Unit Strategic Plans which will be launched on the 25th. There’s already a draft. So again, like I said, we have members of the United Democratic Party that sit on the LIU, people who support the UDP, so leakage like that will happen. The fact that they requested it, again, this is not about egos. I don’t care who suggested it first. The fact remains, those are things that are part of this same body that has devised this plan, this roadmap for us to work with moving forward and so I don’t see any harm done because they announced these recommendations. They’re coming from our plans so that’s fine.”

According to Minister Musa, his door is open to the Leader of the Opposition to share his views and recommendations.

Kareem Musa, Minister of Home Affairs: “Moving forward, and I told this to the Leader of the Opposition many months ago, that he can always offer recommendations and advice and suggestions. My door is open to him to offer that advice and recommendation and so it’s not as though there is this closed door policy. All I’m saying is that you don’t join a program or join an approach and then go in the House and say “Oh you all are failing” when you wanted to be a part of that and the figures are showing that our murder rate is less than when you all were in power. So, you know, I will answer, if that’s what you’re saying. I will not allow misinformation to rule the day. I will give our version of events but, again, I don’t like resorting to going over figures because every single Belizean life lost is one too many. So whether we had 26 this year and they had 38 in 2020, it does not matter. That’s 26 too much still so I don’t like to do that but at the same time, we have to fact check and we have to provide accurate information.”