But are the churches collecting signatures in futility? That’s because the Cannabis and Industrial Hemp Control and Licensing Bill has been passed by the House of Representatives and the Senate. Back then the Senator for Government Business Eamon Courtenay indicated that the legislation will come into force a month later to allow for further amendments. Home Affairs Minister Kareem Musa says that while the churches have the right to petition for a referendum, they are a bit too late. 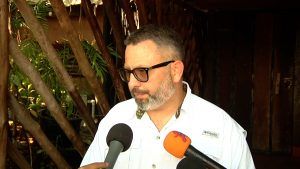 Kareem Musa, Minister of Home Affairs: “The church has all right, Isani, and I keep saying this, to utilise whatever is in the law to their favour. What I have said already is that we have consulted with the churches, even though I’m hearing now they are saying they were not consulted. They were consulted in October of last year. We have minutes of that meeting. At no point did they ask for a referendum, let me make that very clear and I’m not going to call anybody anything but there was no request for a referendum. There was NEAB who did not attend that meeting for whatever reason. We invited the Council of Churches, NEAB did not come. I understand Pastor Wade has been clamouring for a referendum, that’s one voice. There now seems to be this unity at this very late hour when the bill has passed. So we made corrections time and time again. No other bill has ever been revised the amount of time that this particular bill has because of the amount of consultation that we’ve had. So it’s not just the churches. We’re talking about the Belize Medical and Dental Association. We’re talking about the Chamber of Commerce. We’re talking about the social partners, senators, all of them had input in this bill to what it is today and there are changes that I feel were better for the bill so I am totally happy with the progress we’ve made with the bill, but the bill has passed. We reached that point. The bill has passed so at this late stage, again I’m saying this, the church has all right to do what they feel is right, whether they’re within the time limit, I don’t know. That’s for somebody to decide but it’s very late for them to come with this referendum after all the consultation we’ve done. We have to look at the rule of law and what it says as it relates to a petition coming at this hour and so we have to look at that and so it is not my decision. It is up to Cabinet to decide on what we do if it is they come with a petition like that.”

Reporter: Sir a referendum is quite an expensive exercise. In your opinion, who should be held accountable to pay for this referendum?