And while the Cubans were not deported today as expected by the Ministry of Foreign Affairs and Immigration, the substantive Minister, Senator Eamon Courtenay lashed out against what he described as “pseudo-human rights campaigners and lawyers.” During his budget debate speech today in the Senate, Senator Courtenay was candid and unapologetic, saying that the government will not sit idly by and allow the country’s laws to be broken.

Eamon Courtenay, Senator, Government Business: “You know I sat here this morning and let me say this, let me say this. Efforts, and I am going to be clear and unapologetic, efforts continue, up until this very morning, to attempt to undermine the laws of this country. People pretending that they are representing people who want refugee status, people pretending that they are representing people who should not be repatriated as the law requires. Madam President, there is a serious migration problem in this country. The Ministry of Immigration will not sit idly by, by pseudo human rights campaigners and loyals, who pretend that what they’re doing is vindicating the rights of clients, I will say more on that at another time. Madam President, as I said a short while ago, we are working diligently to enforce the laws of Belize to stem the flow of migrants who are entering Belize illegally, who are being trafficked and persons who are moving through and using Belize as a transit destination. The law of Belize will be applied.” 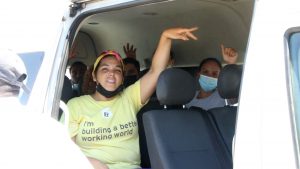