Today, Deputy Prime Minister Cordel Hyde continued with his nationwide mobile land clinic initiative in Rural Belize. The two-day event is in partnership with the Area Representative for Belize Rural North, Marconi Leal, and is being held at the Sandhill Community Center. Reporter Vejea Alvarez was there and has the story.

Vejea Alvarez, Love FM News: This morning dozens of residents from the Belize Rural North Constituency gathered at the Sandhill Community Center in hopes of resolving long standing property issues. One of those residents, Cherry Mae Galvez, says she was there since 5:00 to try and resolve an issue she has been battling since 2003. 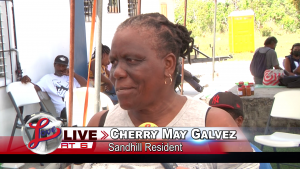 Vejea Alvarez, Love FM News: How much easier was it compared to going to Belmopan?

Cherry Mae Galvez, Sandhill Resident: I think it’s very easier than to go because you have to catch the bus to go and sometimes it’s very frustrating to go there. So it’s very easy here.

Vejea Alvarez, Love FM News: And removing the painstaking process of travelling to the Lands Department in Belmopan is one of the main goals of this initiative, according to Minister of Natural Resources, Cordel Hyde. 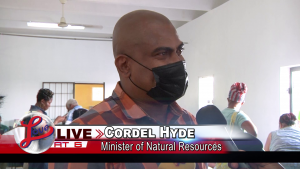 Cordel Hyde, Minister of Natural Resources: “The truth of the matter is that land, land issues, are varied. There are plenty and a lot of them lingering for many, many, many years. And so when we, and the truth of the matter is that Belmopan, there are so many files, tens of thousands of files, so that we don’t have enough hands to keep up with the demand. So when we come and do a clinic, we’re really taking the department to the people and focussing and giving them priority and so they are able to get their stuff done in a very short time, stuff that’s been lingering for many many years, they are able to get in a day or two.”

Vejea Alvarez, Love FM News: The mobile clinics are held over a two day span and run late into the night. Area Representative for Belize Rural North, Marconi Leal Sr., says that over a hundred persons will be assisted within that time. 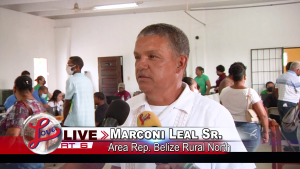 Marconi Leal Sr., Area Rep., Belize Rural North: “We were asked to see, more or less, like 100 people from Belize Rural North today but I am hoping that the Lands Department will work with us and maybe we go up to 125, 150. We don’t know but we’ll see how it looks in the evening. But I know that they will work very late tonight and very late tomorrow night so as much as we can see, we will see today and tomorrow.”

Vejea Alvarez, Love FM News: But despite having to put in several hours of overtime, DPM Hyde says that his ministry finds immense pleasure in helping to assist residents with their land matters.

Cordel Hyde: I think I see in the eyes of our public officers the satisfaction they get from satisfying people, for making people happy. And as opposed to when we’re in Belmopan where there’s usually this rancour and this intensity, on the clinics people are relaxed and people are able to show their appreciation and I think the public officers really value that but, it’s a lot of, lot of work.

Vejea Alvarez, Love FM News: But village council elections around the corner, Leal says that people may be under the impression that the clinic is being held to boost the Party’s chances of winning. But, according to him, that is not the case.

Vejea Alvarez, Love FM News: According to Minister Hyde, the initiative to bring the services of the Lands Department will continue throughout the year. Reporting for Love News, I am Vejea Alvarez.