After all that, Area Representative Henry Usher spoke on the progress of the Briceno administration and how the economy is now performing. It was the perfect opportunity for the PUP Minister to boast of the accolades Belize has been receiving.
Henry Charles Usher, Representative for Fort George, Minister of Public Service, Constitutional and Political Reform: “The Leader of the Opposition spoke about not performing, that the economy was underperforming. Do I need to remind him that it wasn’t only the SIB that said the economy was performing. It was the EU. It was CARICOM. It was the IMF. It was the IDB. It was CDB. It was the MCC. They all came here and said that Belize was performing, Mister Speaker. Even his friends came here, Fat Joe and weh di next one name, Yezi? Even they are saying that the Belizean economy is performing. The Government of Belize is exhibiting the kind of fiscal responsibility and prudence that has led to a recovery. A recovery, Mister Speaker, that the former Prime Minister Dean Barrow said could never be done. He said he grieved for Belize. He and the UDP gave up. They threw in the towel. They bankrupted the country and tried to wash their hands of the numerous fiscal sins that they committed. Through cumulative and collaborative and consultative effort, we have developed Plan Belize and we’re excited to execute what was included in that plan but, there was a crisis, a major crisis and we had to address that first and we did that. We did that with a five part economic recovery plan. 1. Reduce current expenditure: this included everything from the goods and services procured by Government, to the utility bills, to the rentals of property. The goal was 20% and even though this was not achieved, Madam Speaker, Government has to continue to tighten its fiscal belt. 2. Revenue enhancing measures: this included a more aggressive approach to collect customs duties, GST, Land Tax. It included the closing of tax loopholes and even the creation of a Tax Recovery Unit for the collection of outstanding tax arrears. Madam Speaker, the efforts worked. Total tax revenue collected was over $150 million more than what was projected and, Madam Speaker, the next step. The next step is tax reform. We must make our tax system more fair and more equitable. The objective is not to tax some people more but to make the distribution of the tax more level. And certainly, Madam Speaker, there should be no sacred cows. Right Deputy Prime Minister? There is no reason that Boledo should be exempt from paying the same taxes that the other games pay right now. Maybe the Leader of the Opposition can explain why this company was given this privileged status because I don’t know. Maybe it’s because of who is behind the Boledo. Maybe that’s the reason why they were given this status and exempt from paying taxes?” 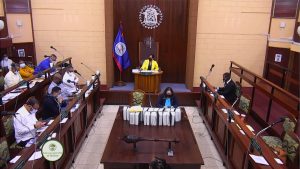