And we also got a reaction from the Minister of Public Service, Henry Charles Usher. Minister Usher says that no public officer should hang up on any person, regardless of status. he says that no public officer should be told how to do their job because they SHOULD know how to do so.
Henry Charles Usher, Minister of Public Service: “Let’s step back a little. I think what’s most important here is the quality of service being provided by our public officers and I think it’s critical to assess whether that service was up to the standard that we expect. Regardless of who is calling you on the phone, it really looks bad and I have to say, I don’t know the particulars of the case. I can only go by what I’ve seen in the media but you shouldn’t be hanging up the phone on anyone, Prime Minister or any other Belizean citizen if they are calling you to ask you about a certain decision made. I think that there’s a duty as a public officer to answer to the beneficiaries of this country who are the Belizean people. So I think that’s the first assessment that needs to be done. Now as to your second question, certainly there are procedures that public officers need to follow and those procedures are worked on over many years in terms of whatever department you’re in, there are procedures that need to be followed and there are rules and regulations that you also must adhere to. So really, nobody should be telling you how to do your job. You should know how to do your job, that’s why you get the proper training as a public officer. If there is an investigation being done into the public officer’s behaviour, maybe not only in this particular instance, but perhaps there are other cases or other times when he may have behaved in a manner not up to standard then certainly the Public Service Regulations governs how any disciplinary measures will happen. It’s not a suspension. It’s an administrative leave that they’re put on and if the ministry, the CEO in the ministry determines that there will be further action taken then they will inform the Ministry of Public Service, no?” 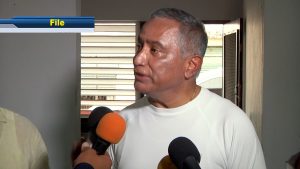