Continuing on the fuel front, bus operators have been clamoring for the Ministry of Transport to allow for an increase in fares. The operators’ request for is based on the high cost of fuel which has them either breaking even or operating at a loss. Transport Minister, Rodwell Ferguson, has announced recently that he will be tabling a paper to Cabinet for an increase in fares, but with a tiered approach. Today, however, he took another angle and spoke of the outdated buses being used on the highways, saying that those in the industry should start looking at acquiring fuel-efficient buses.

Rodwell Ferguson, Minister of Transport: “I will be very factual. I feel the cry of the operators because fuel is now almost $14 a gallon and so they are saying if it is so expensive, I am not going to make any returns on my investment and, unfortunately, in Belize we have very old buses so the fuel consumption is more than new buses that come out the factory. So they have a concern but again the other concern will be now from the commuters. They are saying that regardless of the circumstances you are going to raise the price now and then the bus is inadequate. So again we will have to fix the ground and tell you how we can improve our transportation system across this country.”

Minister Ferguson stated that his Ministry will continue discussion with the Belize Bus Owner’s association to come to an amicable solution that benefits everyone involved in the public transportation sector. 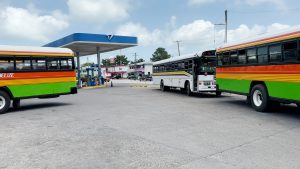