An average of fifteen dollars per gallon of fuel is what consumers would have been paying if the Government did not establish a fuel stabilization fund through the Central Bank of Belize. At the start of the month, Cabinet announced that it would be capping the prices of regular and diesel fuels through a reduction of excise taxes. But, the move came at a loss to the government of about thirty million tax dollars. So how long will the Government be able to absorb some of the cost of fuel? According to Minister of Public Service and Constitutional Reform, Henry Charles Usher, not too long. 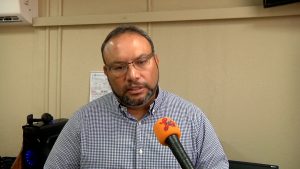 Henry Chales-Usher, Minister of Public Service: “The Fuel Civilisation Fund is for a definite period. It’s not indefinite. We looked at different models at the Cabinet level and certainly we were very concerned about what the cost would be to the Government and as you rightly said, it cannot continue. It’s a big hit that we take every time but we believe that it’s important to keep the cost of fuel at a particular level so that at least the business persons can have some predictability in the cost of their inputs. They know that this is what fuel will cost, at least for this definite period of time. But in addition to that, we’re also looking at targeted relief to certain sectors. The agricultural, the cane farmers for instance, have been getting some fuel subsidies to get relief. We are also targeting the bus owners to make sure that the price of the bus runs don’t go up too high. The Minister of Tourism has looked at targeted relief for tour operators. So they’re being done in conjunction, the stabilisation fund and the targeted relief. The Ministry of Public Service don’t use fuel that particular, we don’t use it to, um, we’re not a big consumer or user of fuel but we certainly have other ministries that have more, like for instance the Ministry of Infrastructure and Development have a lot of projects going on and the fuel is used in those. So we try to centralise the procurement of that fuel to make sure that it’s cheaper for what Government has to pay out and we certainly encourage all public officers, if you don’t need to use the vehicle, don’t use the vehicle. Leave it parked. That’s what the regulations say. We know that there are some instances, I saw some reports about a Government vehicle being at some site in Orange Walk. I’m not sure where it was. But we certainly discourage those types of situations and we try to conserve wherever is possible.”

Reporter: How serious is the ministry in terms of penalising public officers who take advantage of the fact that taxpayers are paying for that fuel?

Henry Chales-Usher, Minister of Public Service: “Well that is done from the Vehicle Care Unit and certainly we’re very serious about it. I know that there have been some disciplinary measures taken already for certain public officers and that has to continue. We have to make sure that we minimise those costs wherever we can, no?”