In our extensive interview with the Minister of Public Service we asked him on his the newly formed portfolio of Religious Affairs. Last week Usher told the media that the portfolio is one that he had been pushing for some time now. Today he explained that the portfolio’s name may have not been the best choice of words since it really will focus on values.

Welcoming the Religious Affairs portfolio is Bishop Alvin Moses Benguche. The Methodist Bishop says it is an important ministry as Belize is still a Christian country for the most part and there is a need to restore those Christian values in the homes. 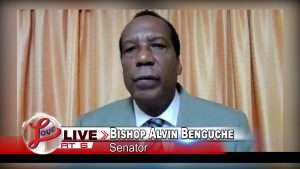 Bishop Alvin Benguche, Senator: “To a large extent Belize is still very much a Christian country and principles, ethics, morals are those things that governs a nation. This was said to us years ago by our founding fathers and mothers. We must not lose sight of those things and I would want to support the minister in this regard that certainly as it involves the Public Service Commission and I would go in so far as to say it is also a good suggestion insofar as the private industry is concerned that we must be driven by good morals, good ethics, and at the beginning and the start of this new year I cannot agree with him more insofar as these things are concerned because it will help to also energize the public service and I think it will raise the level of service insofar as work ethic is concerned.”

Bishop Alvin Benguche, Senator: “ The discussion started some time ago in our discussion with the Prime Minister and in our talks with the Prime Minister and to be fair to him we have had that kind of communication in recent times where he has met with us on a number of occasions. On the last occasion that we met with him we again expressed to him that while we are always happy to see him and he is always happy to be a part of the dialogue and meeting with us that in order to have a first hand communication as to some of the dynamics and some of the mechanisms, some of the things that need to be put in place insofar as direct communication instead of it going through his office that perhaps it would be best to set aside somebody in the cabinet to be able to deal with those situations. And the Prime Minister to his credit listened to the churches and I think we must commend him for doing so and we’re only hoping that as we go forward we will be able to put the framework in place as to how this will work but to the government’s credit, and to the prime minister’s credit, we must commend him. This is unprecedented. I know that perhaps some levels of communications would have taken place in different perspectives but this is the first time I think in Belize where we are having and the government has put in place something of this nature and I think that both the government and the churches and when I say the churches I mean all the churches and religions that we will be able to benefit from this direct communication with cabinet minister.”