Maxine Monsanto, Dir. of Blue Economy, Min. of Blue Economy: “Today’s event is a validation workshop for the Belize Blue Economy Development Policy and Strategy. It’s the first policy and strategy being developed for the Blue Economy. It’s a five year plan. In essence, an overarching document that once validated and moved towards Cabinet approval should guide the way how we promote economic growth within Belize’s blue spaces, specifically our oceans, seas, and coasts. Today’s workshop is being attended by several stakeholders across multiple sectors including the office of the Prime Minister, NGOs like TASA, MAR Fund, Audubon Society. Academia, we have the Galen University among others and they’re all here to finalise work that began in January on the development of this policy.”

Monsanto says that the purpose of the national policy is to guide the success of a thriving Blue Economy pathway in Belize.

Maxine Monsanto, Dir. of Blue Economy, Min. of Blue Economy: “It’s the overarching guiding document for what the ministry will do going forward. In essence, when the Ministry of Blue Economy was established, its function is to support economic growth within the blue space and as you know, multiple sectors share this space and we need to come up with a coordinating mechanism and something to guide how we move forward. In essence, we’re basically charting new territory since this hasn’t been done before and this is the primary reason why it’s multiple stakeholders across different sectors because everyone has a role to play in its implementation. So this is one step in a several steps of documents that will be packaged together as to how we move forward for Belize. The overarching point of Blue Economy is the sustainable development and use of our marine and ocean resources through a coordinated method between all stakeholders. So the purpose of this policy is to highlight the different shared stakeholders that have a role to play in that option in an overarching pathway. That basically then guides when we develop sector specific strategies or when we develop investment policies or when we move forward with activities. Whether it be eco-tourism, shipping, energy, fishing, that it’s done in a way that follows science, that’s guided by very specific principles and that meets the needs of Belize’s economic growth as well as the needs of the environment and its people.”

Tomorrow the Ministry will be planting mangroves in front of their headquarters on Seashore Drive in Belize City as a part of earth day activities. 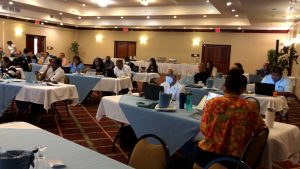