A family’s worse nightmare became reality over the weekend with the drowning of 16-year-old Enrique Quiroz. The teenager was swimming in the Mopan River in Bullet Tree Village when he went under and never resurfaced. Reporter Vejea Alvarez has the details.

Vejea Alvarez, Love FM News: A mother’s worst nightmare became a reality on Easter Monday when her second youngest child died while swimming in the Cayo district. Just before 2:00, 16 year old Enrique Quiroz and two of his friends were taking a dip in the Mopan River near Bullet Tree village when his life was cut short. Quiroz reportedly went under and did not resurface. His sister, 26 year old Anya Quiroz, was shocked when her family got the news. 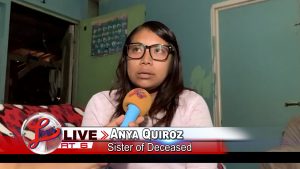 Anya Quiroz, Sister of Deceased: “My mom did not know that Enrique was going to the river. Like I said previously, he informed her that he was going to be hanging out in the neighbourhood with his friends so the report that we got, approximately around 2:45, 3, was that he drowned in the river. So it was a shock. We did not believe it. We did not believe them. So I took it upon myself to go to Bullet Tree with the help of one of my relatives. So we reached there and I identified the body and it was him. Sadly, it was him.”

Vejea Alvarez, Love FM News: Quiroz’s body was fished from the river by divers in the area who tried to resuscitate him but by then it was too late. For his mother, it’s a calamity, one that she always feared would have happened.

Anya Quiroz, Sister of Deceased:  “This is a shock because growing up, my mom never took us to the river. She had a tragic experience with one of my little brothers who almost drowned as well. Gladly, she managed to save him when he was younger so since then, my mom does not allow any one of us to go to the river. She does not take any one of us and right now that even though we are adults, whenever we say that we would be going to the river, she gets scared. She would always pray and keep us in her prayers.”

Vejea Alvarez, Love FM News: While his family will never get to see him again, they say that his jovial and spontaneous personality will remain in their memories.

Anya Quiroz, Sister of Deceased:  “He was very friendly so he would be about with his friends hanging out so this really came as a shock to us. We did not expect this. So we’re just grieving and we’ll remember him as who he was. You know somebody friendly. He was very, you know, an extrovert person. He would be hanging out with people older than him. He would carry himself as someone, he would do his little extras, you know, working.”

Police Press Officer ASP Fitzroy Yearwood says that there are no signs of foul play.

Reporter: Any explanation as to how the victim lost his life sir?

ASP. Fitzroy Yearwood, Police Press Officer, BPD: “Our investigators, so far, have gathered information that he was accompanied by two other minors and they were seen swimming in that area when he just went down.”

Reporter: Is it known that this young boy can swim or anything like that?

ASP. Fitzroy Yearwood, Police Press Officer, BPD: “That I wouldn’t be able to answer. Whether or not you can swim, he submerged. I mean there are many reasons you would go under, unexplainable, of course,  because only he could answer those questions and he’s not here to answer that for us.”