A family in Belmopan received devastating news when they were told that the body of sixteen-year-old Daniel Guiterrez was found in a drain near the cemetery on San Martin Road. His family told Correspondents Fem Cruz and Pauline Soberanis Tillett that Guiterrez had no enemies. Hipolito Novelo reports.

A family is worth’s nightmare came true on Sunday morning when they were informed that the decomposing body of 16-year-old Daniel Gutierrez had been found. The body of the teenage boy was found in a cemetery in the San Martin Street area. He had been stabbed several times and murdered. His father says that his son’s killers captured him on Tuesday the last day he was seen alive. 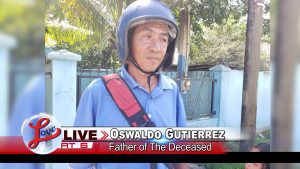 Oswaldo Gutierrez, Father of the Deceased: “What I know about the incident that is they caught him in the Salvapan Bridge right there they captured him and they took him somewhere else.”

Reporter: When was this?

Oswaldo Gutierrez, Father of the Deceased: “That was Tuesday night.”

Reporter: Did the family make any report?

Oswaldo Gutierrez, Father of the Deceased: “No not at that time because we didn’t know because he told my mother that he was staying here and sleep in her house at that time so I didn’t expect him to reach to my house that is the report that I made to the police.”

Gutierrez was reported missing on Thursday but by that time it was already too late. The young man, his father says, had no enemies but that there are young men in the area that terrorize residents. This attacked may have been unprovoked and the victim could have been anyone.

Oswaldo Gutierrez, Father of the Deceased: “He has no enemies. He’s a 15 year old a kid but he doesn’t listen to me I told him not to go in the night don’t be out there because something can happen to you. Our kids they don’t want to listen to their fathers, they are very headstrong and want to be all hours of the night up and down in the street.”

Investigators in Belmopan said Gutierrez had been threatened before the suspects are in police detention.

Chester Williams, Commissioner of Police: “We have two persons in custody who we believe may have something to do with his death dude with some previous threat that they had sent to him.” 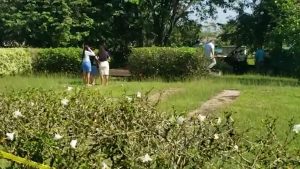